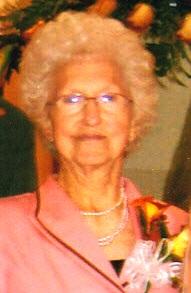 Doris Virginia McCoy, 82,  of  Morgantown, Ky. entered into rest in the arms of her loving savior at 8:45 p.m. Tuesday, September 24, 2013 at the Morgantown Care and Rehab Center in Morgantown. Mrs. McCoy was born December 17, 1930 in Garrard County, to the late John Hudson and Mary Buckley Hudson.  She was a member of Union Missionary Baptist Church and Sunday School teacher for many years.  She was a retired school bus driver of 30 years for the  Butler County School System and worked at local restaurants and factories.

Virginia was the beloved wife of Presley McCoy for 66 years,  beloved mother to Mary Ann Lockhart and her husband Ricky , beloved grandmother to Jennifer Brown and her husband Brandon, Lance Lockhart and his wife Alana and Cody Lockhart all of Morgantown ; beloved great-grandmother to Lydia Grace Brown & Matthew Landon Brown both of Morgantown; She was a beloved aunt to many nieces and nephews and a beloved friend to all who knew her. Virginia is survived by her  brother Johnny Buckley and wife Emmerdean of Morgantown, brother- in-law Denver Belilies of Morgantown. The Lord, her family and her friends were her life.

Funeral Service will be held at Smith Funeral Home, Saturday, September  28, 2013 at  12:00 p.m.  with Bro. Roger Skipworth and Bro. David Daugherty officiating . Burial will follow in the Union Cemetery. Visitation will be Friday, September  27, 2013 from 4:30 - 8:00 p.m. and Saturday 8 a.m. until time of service at Smith Funeral Home.
Online Condolences may be made at www.smithfuneralhome1886.com