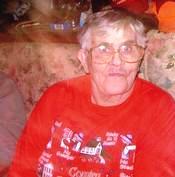 Virgie Lee Casey , age 72 of Caneyville, Ky. passed away Monday December 05, 2011 at Twin Lakes Regional Hospital. She was born on May 19, 1939, the daughter of Ben and Artie (Embry) Embry. She and her husband had been married 52 years. She was a Homemaker & housewife.

Funeral services will be Thursday, December 8, 2011 at 1:00 P.M. at the Dermitt Funeral Home in Caneyville, with Bro. Gary Embry officiating, with interment in the McCanless Cemetery.

Friends may call at the Dermitt Funeral Home in Caneyville, Wednesday from 3:00 until 9:00P.M. and Thursday 9:00 until funeral time.