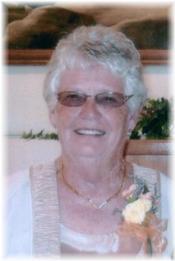 She was a retired sewing machine operator, who enjoyed her flower garden and walking. She was a member of the Noah’s Chapel Church in Butler Co., Kentucky.

She is survived by her husband, Clayton Dockery, her step-daughters, Debbie Sims of Tennessee, Nancy Allen of Leitchfield, Kathy Ferguson, Marilyn Smith, Pauletta Howard and Lesa Schoenbachler all of Louisville, her step-son, Charlie Nash of Leitchfield, 18 grandchildren and fifteen great grandchildren, two sisters-in-law, Jewell Nash of Georgetown, IN and Peggy Nash of Henderson KY and several nieces and nephews.

Other than her parents, she was preceded in death by her husband, Charles Nash, five brothers, Grady, Edgar, James C., Dewey and Edwin Nash, and two sisters, Zada Basham and Ruby Nash.

Funeral services will be at 1:00 p.m. Monday, (April 1, 2013) at Dermitt Funeral Home in Leitchfield. Bro Randall Deweese will be officiating. Burial will be in the South Union Cemetery.