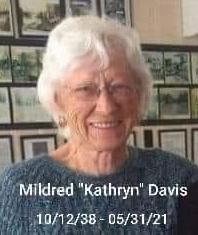 Mildred K. Brown Davis, age 82 of Lewisburg, passed away at 4:54 am Monday at the Medical Center at Bowling Green. She was born to the late Deward F. and Mildred Venice Wester Brown. Mrs. Davis is the widow of Hugh L. Davis. She is also preceded in death by her son Terry Nicewinter, sister Betty June, and brother James "Butch" Brown. She was a retired insurance Sales Agent and a Baptist.

She is survived by her son Kerry "Bub" Nicewinter and his wife Lisa of Morgantown, daughter-in-law Donna Nicewinter of Kouts, Indiana. Three Grandsons, John Ross Webster (Janesa), Beau Nicewinter (Makaila) and Josh Nicewinter (Lydia), and ten great-grandchildren all of Morgantown.

Mrs. Davis requested to be cremated with no services. Arrangements have been entrusted to the care of the J.C. Kirby and Son Broadway Chapel in Bowling Green, Kentucky.