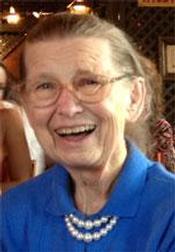 Lucy Childers Ritter, 80, of Bowling Green died Sunday, September 22 at the Bowling Green Medical Center. She was born October 6, 1932, a daughter of the late Thomas Davener Childers and Iona Mae Viles Childers and was preceded in death by a sister, Rachael Susan Pendley and two infant brothers.

Mrs. Ritter was a Registered Nurse, retiring as Associate Director of the Western Kentucky University Health Service. She attended Murray State University where she completed the Diploma Program through the Owensboro-Daviess County Hospital, and she was a graduate of Indiana University with a Bachelor of Science degree in General Nursing.

She was a member of the First Christian Church (Disciples of Christ) and the Kiwanis Club. She volunteered at the public library and, through her church, served in the Meals, Inc. and the Food Bank Ministries.

Expressions of sympathy may take the form of contributions to the First Christian Church, The American Cancer Society, Hospice of Southern Kentucky or the Kentucky-Tennessee district of Kiwanis International Foundation.