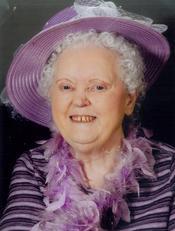 Kathleen " Kathy" Harris Cockrill, 93, of Bowling Green, Kentucky, died quietly in her sleep on Saturday, June 9, 2012, at Hospice of Southern Kentucky in Bowling Green. Mrs. Cockrill, daughter of the late Clifford and Alma Pruett Harris of Scottsville was born in Scottsville on April 3, 1919. She married Willard Cockrill of Scottsville on August 25, 1945. He preceded her in death on December 3, 2000. Kathleen and Willard resided in Bowling Green, Kentucky, where she attended Bowling Green Business University, and she retired as the office manager for Drs. Kafoglis, Hatcher & Dobson. She was an active member of State Street United Methodist Church. Funeral is at 2:00 p.m. Wednesday at Johnson-Vaughn-Phelps Funeral Home with graveside service at Crescent Hill Cemetery in Scottsville. Visitation is from 5:00 p.m. to 8:00 p.m. Tuesday at Johnson-Vaughn-Phelps Funeral Home. Expressions of sympathy may take the form of contributions to: State Street United Methodist Church or Hospice of Southern Kentucky. Survivors include her daughters, Anita Shrader of Bowling Green, Kentucky, and Terry Powell of Elkton, Kentucky; two grandchildren, Ami Brooks and her husband, David Brooks of Russellville, Kentucky, and Seth Powell of Russellville, Kentucky; and one great-grandchild, Katie Brooks of Russellville, Kentucky.