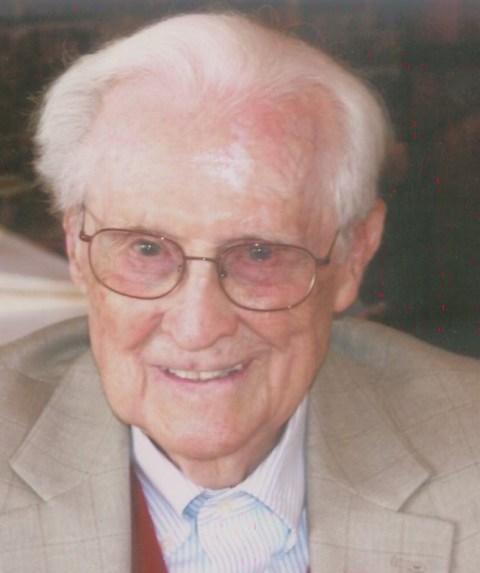 Julian Carroll "Jack" Moore, 88 of Morgantown, Kentucky passed away Friday October 5, 2012 at the Morgantown Care and Rehab in Morgantown, Kentucky. Born in Chesterfield County, South Carolina, he was the son of the late Julian Clyde and Etta Jordan Moore. Following graduation from Lancaster High School, Jack enlisted in the Army and was a veteran of World War II serving in the European Theatre Operation with the 796 AAAW SP Battalion. He attended Clemson University on a baseball scholarship. He continued his education at United Television Laboratories in Louisville, Kentucky and Capital Radio Engineering Institute in Washington, D.C.

While playing baseball in Louisville, he met the love of his life, Jeanne Leach. They married in 1951 and became parents of one son, John Eric "Ricky" Moore. Both Jeanne and Ricky predeceased Jack.

Jack worked for 37 years in the electronics division at Arvin Industries in Columbus, Indiana, retiring from the position of Chief Components Engineer. He then moved to Morgantown, Kentucky to live in Jeanne's childhood home.

As part of "The Greatest Generation" he recently visited the World War II monument in Washington, D.C. He traveled with the Honor Flights of Cincinnati, Ohio and was sponsored by the Daughters of the American Revolution, Green River Chapter.

He established a scholarship in honor of his late wife and son at Western Kentucky University, Bowling Green, Kentucky. An additional scholarship in memory of Ricky and Jack was established at Charleston Southern University, Charleston, South Carolina, where Jack served as a member of the Board of Visitors. Special endowments have been made to the Methodist Children's Homes in Kentucky and Indiana, as well as to the Morgantown First Methodist Church by Jack.

Jack is also survived by his godchildren, Roger Banister and Denise Banister Kocur of Columbus, Indiana. They are the children of Jack's lifetime friends Bill and Cleo Banister.
Also surviving is Mrs. Jean Romans who is a special family friend. In addition to caring for Jack, she had cared for two generations of the Leach family Mrs. Margaret Leach and Jeanne Leach Moore. Hugh Evans was a good friend and golfing buddy.

Funeral services will be held at the Morgantown First Methodist Church on Sunday October 7th 2012 at 2:00pm with Bro. Darrin Jones officiating. Burial will be in the Riverview Cemetery. Visitation Saturday October 6, 2012 from 3:30 - 8:00pm at the Jones Funeral Chapel and Sunday October 7, 2012 from 1:00pm until funeral time at 2:00pm at the Morgantown First Methodist Church. Online condolences may be made at www.jonesfuneralchapel.com.

Submitted by Christine Coleman (not verified) on Fri, 05/10/2012 - 2:21pm
Jack was a precious soul who loved everyone. Miss him already. With much love to his family. Christine & Denzil Coleman & Family
Submitted by Kalie Tabor (not verified) on Sat, 06/10/2012 - 1:23pm
I thought a lot of this man!! He was always a great person ... Every time I seen him we would talk about everything!! I am happy he is in a better place and can see his wife again because he sure loved her!! Ill always think about you Jack :) Love Me and Nana!!
Submitted by Linda Tyree (not verified) on Sun, 07/10/2012 - 8:19pm
I never encountered Mr. Moore without a smile on his face and a friendly word. He will certainly be missed.
Submitted by jennifer odle (not verified) on Mon, 08/10/2012 - 10:08am
Jack always had a smile for everyone and if I made the mistake of calling him "Mr. Moore" he would smile and say my name is Jack. Going to miss you Mr. Moore OH, I mean Jack.
Submitted by Tommy Hines (not verified) on Tue, 09/10/2012 - 8:41am
So sorry to read the news about Mr. Moore this morning. He was a fine gentleman with a kind heart and he will be missed.