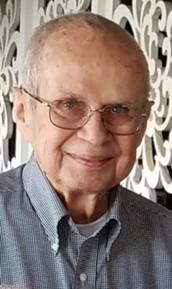 John Henry Tharp, 83, passed away on Friday June 14th, 2019. Arrangements have been entrusted to Cleveland Funeral Home, Watertown.
John was born in Detroit, MI on March 17th, 1936 to the late James and Eleanor (Hymes) Tharp.
John attended the local schools before joining the United States Navy in 1954. During his time in the Navy, he worked as a naval photographer, and photography instructor. John spent time at various stations including Pearl Harbor, HI, Whidbey Island, WA, Oklahoma, and Tennessee. John’s service in the Navy ended in 1973.
After his time in the Navy, John became an ordained minister in 1978 in the Church of the Nazarene, and Pastored for over 40 years in Kentucky, Tennessee, Arizona, Illinois, Indiana, and Michigan. John H. Tharp was the first pastor at Morgantown Church of the Nazarene.
John had a sense of humor, loved telling corny jokes and enjoyed puppetry and sleight of hand. He loved watching wildlife, painting, playing snooker, billiards, and golf. He also loved watching Nascar and the Detroit Tigers.
John is survived by his loving wife Mary, his two children: Pastor Robert Tharp (Julie), Watertown, NY, and Barbara Tharp, Watertown, NY. He is also survived by three brothers: Richard Tharp, Odenton, MD, David Tharp, Ridgley, MD, and Larry Tharp, Ridgley, MD, two grandchildren: Cameron (Anne) Tharp, Kansas City, MO, and Alex (Sarah) Tharp, Waco, TX, along with several nieces, nephews, and cousins. He is also survived by his beloved dog Jill.
He is predeceased by his parents, and a sister, Nancy Meyer.
There will be a visitation from 10am-12pm with a memorial service at 12pm, Wednesday, June 19th, 2019 at the Life of the Nazarene Church at 535 Thompson Blvd, Watertown, NY 13601. The service will be officiated by Reverend Ron Graeflin.
Online condolences may be made at www.ClevelandFHInc.com.