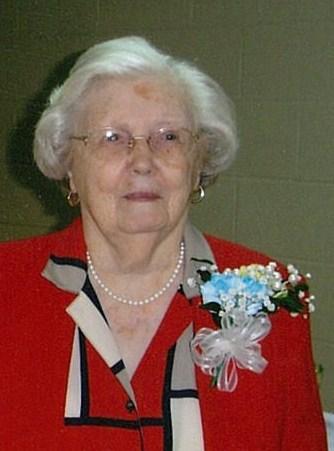 Jewel Mayhugh McCoy, 95 of Morgantown, Kentucky, passed away Tuesday, April 2, 2013, at the Morgantown Care and Rehab. Jewel was born April 7, 1917, in Butler County, Kentucky to the late Friday and Florence Porter Mayhugh. She was a member of First Baptist Church of Morgantown, retired from Warren Rural Electric after 30 years of service, and worked 12 years at the AFCS office. She was preceded in death by four sisters; Nada Proctor, Eva Mae Askew, Ovie Mayhugh and Leatrice Givens.
Jewel Mayhugh McCoy is survived by two brothers; Charles Mayhugh and wife Edith of Morgantown, Ky. and Herman Mayhugh and wife Louise of Smith's Grove, Ky.; two sisters; Frieda Paschal of Bowling Green, Ky. and Loyce McCoy and husband Desper of Newburg, Indiana, and several nieces and nephews.
Funeral services will be held at the Jones Funeral Chapel Friday, April 5, 2013, at 1:00pm with Bro. Jim McDaniel officiating. Burial will be in the Union Cemetery. Visitation will be held on Thursday, April 4, 2013 from 4:30pm - 8:00pm and Friday 8:00am until funeral time at 1:00pm at the Jones Funeral Chapel. Online condolences may be made at www.jonesfuneralchapel.com