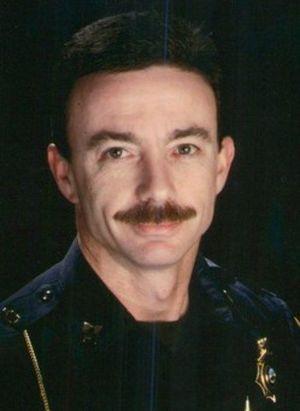 Ernest C. “JR” Wilkins Jr., passed away April 1, 2015, in Bowling Green. JR was born July 6, 1962, in Louisville. His parents, Ernie Wilkins and Anna Rose Welby, preceded him in death. JR is survived by his wife, Deborah (Tomes) Wilkins; daughter, Jessica Wilkins Mercer (Adam); sister, Kathy Conrad; and nephew, Nick Conrad, all of Bowling Green; and numerous cousins, nephews, and nieces. He was the son-in-law of James B. and Marilyn Tomes, also of Bowling Green.

JR attended Western Kentucky University, the University of Louisville, the Kentucky Department of Criminal Justice and the Institute of Police Technology and Management in Florida. JR served with the Bowling Green Police Department (Assistant Chief), and the Morgantown Police Department (Chief), the Warren County Sheriff’s Office and the Kentucky Department of Alcoholic Beverage Control. JR was noted for his expertise in training, mentoring and supervising law enforcement officers and his ability to manage critical incidents. He was a certified crisis negotiator and was declared a “Hometown Hero” in 2007.

JR felt strongly that police officers should be kind and brave and should give back to the community in addition to protecting it. It was not uncommon for people he had arrested in the past to approach him and thank him for his courtesy and the respectful way with which he interacted with them. He served on the boards of CASA (Court Appointed Special Advocates), the Rape Crisis Center and Foster Grandparents. He was an active member of the Leadership Bowling Green Program for many years and the Hilltopper Athletic Foundation.

JR enjoyed bass fishing, a good steak, cold beer and the company of friends, family and dogs. JR had a great sense of humor, and his friends came from all walks of life; country folk and scholars, saints and outlaws (reformed), and he even counted among his friends a couple of New Yorkers. Children and dogs loved him; cats respected him. His integrity, character and loyalty made him a true “man’s man.” His courtesy, good looks and flirtatious ways made him a “lady’s man,” too. Loved by many, he will be sorely missed.

Visitation is from 2 to 7 p.m. Monday at J.C. Kirby & Son, Lovers Lane chapel, and from 9 to 11 a.m. Tuesday. Funeral is at 11 a.m. Tuesday at the funeral home. Burial will be at Fairview Cemetery.

Expressions of sympathy may take the form of contributions to the Bowling Green-Warren County Humane Society and/or the Gary Raymer Scholarship for Police Officers families.