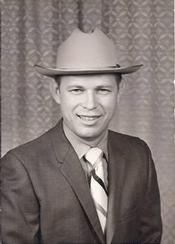 He was born on September 1, 1931, in Butler Co., Kentucky, the son of the late Christopher C and Bessie Pearl Phelps Lee.

He was an owner and operator of Lee’s Motel, a real estate broker and auctioneer, was a Korean War Army Veteran and was a member of the Mill Street Church of Christ.

Other than his parents, he was preceded in death by a grandson, Oliver Daniel Winn, a brother and sister, Elmer Lee and Geneva Anderson.

Funeral services will be at 1:00 p.m. Monday, (July 16, 2012) at Dermitt Funeral Home in Leitchfield. Harold Byers and Joseph Cooper will be officiating. Burial will be in the Layman Memorial Cemetery.