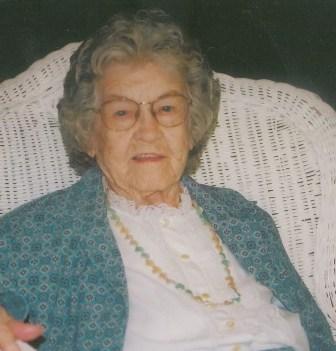 The Grayson County native was born Sept. 4, 1911, daughter of the late Jackson "Poppa" and Martha King Embry and wife of the late Rev. Wiley B. Woodcock. She was a faithful member of Free Union General Baptist Church (Old Decker) and a homemaker.

Submitted by Sara Henderson (not verified) on Fri, 01/06/2012 - 7:38pm
I sure will miss my Grandma!! She was one strong, amazing woman. I Love you Grandma...May you rest in peace
Submitted by April Raymer (not verified) on Sat, 01/07/2012 - 10:38pm
Grandma Ada was such a blessing if we could only leave half a testimony as she did we could say our journey has been a blessed one! She has been such an inspiration in our lives and her memory will be with us forever...forever greatly missed--
Submitted by Vickie Kiper Brooks (not verified) on Sun, 01/08/2012 - 7:56am
I'm sure she will be missed, she was one person that when you saw her come in the door at church that you knew you was going to have a service beyond any other. She was one of the sweetest people I know. My heart goes out to you but you know where she is without a doubt.