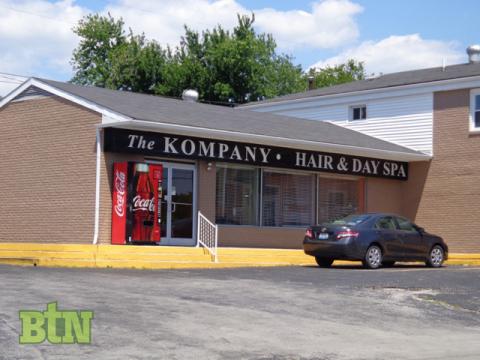 A Morgantown woman is recuperating today after being bit by dog - a red Pit Bull - yesterday in the parking lot of a local business.

Wanda L. Embry, wife of State Representative C.B. Embry Jr., was attacked yesterday afternoon shortly before 3 p.m. as she was attempting to enter The Kompany Hair and Day Spa, located on G.L. Smith Street in Morgantown.

According Morgantown Police Officer John Ford, Wanda Embry was entering the business near the steps going into the door when the dog - a four and half year old Pit Bull - "jumped and bit Mrs. Embry on the face and left cheek side."  Embry's face received "multiple lacerations and was bleeding" when Office Ford arrived on the scene at 3:03 p.m.

Wanda Embry suffered wounds to her face and began taking shots yesterday in order to fight any possible infection.  She will continue the shot regimen over the next few days.

The owner of the Pit Bull ("Rizzo"), according to the police report, is Trisha Gist, who told Ford she was in the business at the time of the attack and that the dog was "under the supervision" of Ricky Wilholt.  Mr. Wilholt stated to police that he had placed the dog in the car with the window cracked for air and did not realize it could get out through the window. He had returned to the business and was inside when the bite occurred.

Gist told Ford  "Rizzo" was current on all shots but a check with their veterinarian at Heritage Animal Hospital indicated that the dog as described by Ford had "no shot record on file."  Officer Ford informed Embry, who was en route to a doctor, that the dog was not current on shots.  Embry told Ford she would have to go through the vaccine process against rabies, which involves a series of shots.

Ford sad he also informed the local health department and spoke with environmental agent Adam Massey, who instructed Ford to have Ms. Gist quarantine the dog for a ten-day period to check for rabies infection.  "Rizzo" is currently quarantined at The Doggie Barber, a pet grooming business owned by Gist.

For his part, Officer Ford said he observed the dog and it "seemed agitated and aggressive" as it was being restrained by Mr. Wilholt.  Ford said the dog was not on a leash and that he did not observe a leash in the vehicle.

Gist, who stated that she would pay all expenses incurred by Mrs. Embry, is charged with a leash law violation.