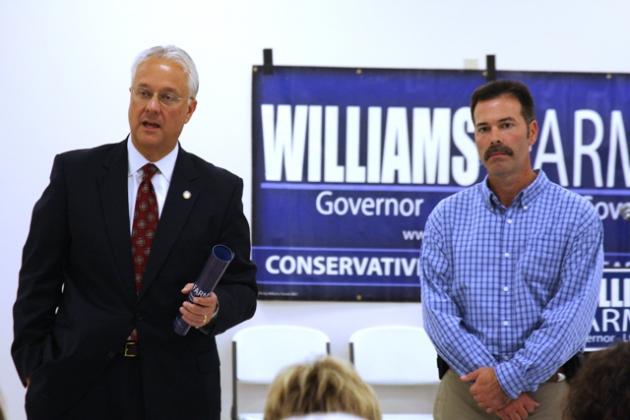 Senate President and Republican Gubernatorial Candidate David Williams, his wife Robin, and Agriculture Commissioner and Lt. Governor Candidate Richie Farmer stopped in Morgantown on Thursday as part of their bus tour across the state to promote their jobs plans and encourage voters to head to the polls on Tuesday, November 8.
“We want to make Kentucky the best place in the country to create and retain jobs.  We have a plan to create jobs and grow Kentucky’s economy for the future. Kentucky’s high unemployment, Obama-style government spending and mismanagement of state government are out of control,” said Williams.

According to Williams the difference between the Williams and Farmer ticket and Beshear is clear, "We're pro-life, we're pro-second amendment, we're pro-coal, we're pro-jobs, and we're anti-Barack Obama."
“I have been able to realize all my dreams right here in Kentucky, and I want my three boys to be able to do the same,” said Farmer. I know they say we are behind in the polls, but votes are what counts, I played in basketball game years ago and we were down 31 to LSU at halftime, and we came back and won that game. We can do the same on November 8th with your support.”
Check out Williams’ complete job plan at www.williamsfarmer.com.