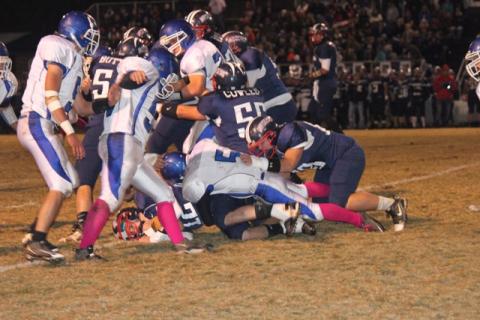 The Butler Co. Bears lost in overtime at Edmonson Co. by the score of 27- 21, to close out the 2011 regular season. The Bears now 7-3 overall, while the Wildcats finished  a perfect  10-0 and both move on next week to prepare for the KHSAA State playoffs. The border rivalry despite Butler and Edmonson being in different districts and classes this year lived up to everyone’s expectations.

Edmonson Co. is a long time rival, and presently Butler Co. and ECHS are in the same basketball, softball, and baseball districts. So it goes without saying the football game gets its share of hype, and if you were not able to attend the BC/EC game was another football classic.  The game was physical, emotional, and saw the lead change as the night played out. And then add overtime for good measure.

Butler Co. came into the game an underdog, but at halftime the game was all tied at 7-7. Both clubs had limited success moving the football through out the night, but especially in first half of play. Then with only 2:57 remaining in the third quarter of play senior wide out Clay Embry hauled in his second touchdown pass of the night, but the point after was blocked, but the Bears had regained the lead 13-7.  Edmonson Co. would respond taking advantage of a Bear turnover drove sixty-five yards on six plays for a Wildcat touchdown, the kick was good and with 7:06 remaining in the game the Wildcats grabbed a 14-7 lead.

The Wildcats momentum continued as they recovered the onside pooch kick, and drove for another score taking a 21-13 lead with 6:09 remaining.  The Bears would respond with composure and mount a drive that would cover seventy-four yards on nine plays.  With the Bears facing a fourth down and eighteen, quarterback Elijah Flener found Cole Tynes in the end zone for a twenty-three yard touchdown pass completion. Score now 21-19, the Bears had to go for two for the tie and put the game into overtime.  On the two point conversation Flener ran the QB sneak into the end zone and the score now tied at 21-21.

The overtime period the Wildcats converted on fourth and goal from the two and quarterback Josh Milam ran for the touchdown, the kick was blocked by Jacob Oliver, score 27-21. The Bears in overtime were not able to convert and the final score read 27-21 Edmonson Co.  So the Bears finish 7-3 on the season but these past two weeks the Bears even in defeat have gained valuable experience that will surely help as they prepare for the first round of the state playoffs. More on that game to come. Here is a look at the game inside the game and the stats.

The Butler Co. Bears (7-3) overall, and the #3 seed travel to Princeton, Ky. to take on the #2 seed Caldwell Co. Tigers  (5-5). This is a first round KHSAA State Class 2A playoff game.  The game is Friday, November 4th; kickoff is at 7:00 pm.  This week all across the state begins the KHSAA football state playoffs, the entire month of November is the road to the Class 2A State Finals which be held @ WKU in Bowling Green on Friday, Dec. 2nd.  Good luck to the Bears as they begin playoff competition this Friday night at Caldwell Co. HS.