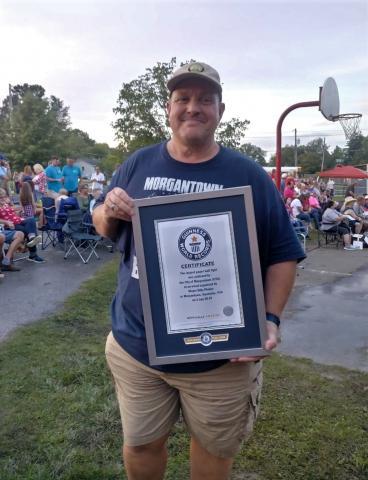 The week of July 1 through 7 presented in photos:

As part of the Green River Catfish Festival, the first ever Special Friends Day took place on Wednesday as well. This event allowed for those with special needs to experience rides and festivities before the general public arrived on Thursday. A performance was also put on by the Rockerz Dance Team from the Down Syndrome of South Central Kentucky Organization.

The city of Morgantown broke the current standing Guinness World Record for the World’s Largest Paper Ball Fight with 660 participants on Thursday, July 4.

The car show took place at 6 p.m. with cars driving through the park and parking at the Eva J. Hawes lot for viewing.

A Dino Roar show took place daily at 4 p.m. Children gathered to view the dinosaurs that were present on Friday, July 5 and were asked to help “tame” the T-Rex.

The dog show also took place on Friday and consisted of a small and large dog portion of the competition as well as a costume portion.

The festival’s first ever “Catfish Wrastlin'” took place on Saturday, July 6. Contestants competed to be the first to wrangle a 10-15 pound catfish out of the tank with just their bare hands. The winner of the prize belt and $150 went to Corey Burden.