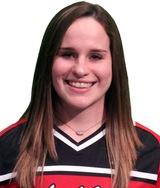 Hanceville, Ala. – After a shaky start, the Wabash Valley softball team took the 14th-ranked team in the country to the mat before surrendering the lead in the bottom of the sixth inning.

Only after a three-run sixth inning did Wallace State (6-0) remain undefeated, earning a sweep of Wednesday's doubleheader with a 5-3 win. The Lions had a much easier time of things in the opener, winning 17-2.

"We took a lot of positives from the second game," said Warriors' coach Asa Deffendall, in his second season at the helm. "We hope to build from there."

Wabash Valley (0-2) committed six errors in the opening game, and the Lions "capitalized on them all," according to Deffendall.

"We looked like a team which hadn't been outside yet."

The Warriors scored both their runs in the top of the fourth inning.   Freshman catcher Hannah Chaney opened the frame with a single, and later scored on a fielder's choice hit by Katie Smith. Smith then scored on a base hit by the next batter, sophomore returnee Lily Garbett.

Deffendall was impressed with what he saw from Wallace State. "They are one of the best junior college teams we've seen in a long-time," he said.

The Lions are already building a solid resume, having beaten second-ranked Chipola, Fla., 5-4, in their most recent game.

But in the nitecap on Wednesday, Wallace State trailed for most of the game.

WVC jumped out to an early lead with a three-run first inning.

Gracie Himelick singled and went to second on an error by the left fielder.  Casey Schweitzer brought her around with a ringing double down the left field line.

Schweitzer then scored on an overthrow from the third basemen on a ground ball off the bat of Maggie O'Kelley.

Shelby Harpenau, inserted as a pinch-runner for O'Kelley, made it 3-0 when she scored on a fielder's choice hit off the bat of starting pitcher Kaitlynn Bennett.

Wallace State collected only two hits off the Warrior hurler in the first five innings, but they were big. Two solo home runs – one in the fourth and one in the fifth – brought the Lions to within 3-2 entering the decisive sixth.

After pushing across one run to tie the game at 3-3, the hosts pulled ahead for good with a two-out, two-run single.

Weather is impacting Warrior travel plans in a big way. Not only did they learn that the entire three-day long Tigerfest tournament in Booneville, Mississippi, set to begin on Friday, had been cancelled due to inclement weather, but the team's return trip to Mt. Carmel has also been delayed as well. Deffendall said deteriorating weather conditions forced the team to layover Wednesday night in Nashville.