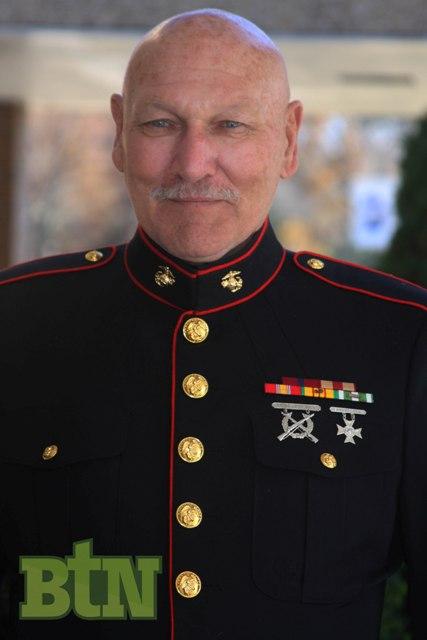 The Ladies Axuiliary to the VFW Post named Geoffrey Henderson Veteran of the Year on Friday night at the Post. Geoffrey Henderson was born the second son of George and Anna Henderson in Welland, Ontario, Canada near the Erie Canal. The Henderson family immigrated to the United States in 1962 and Geoffrey completed high school in Park Forest, Illinois. He enlisted in the United States Marine Corp in 1962 just prior to graduating and left for boot camp in San Diego, California a month later. After boot camp, he went to Camp Pendleton, California for ITR (Infantry training) where he was trained to be radio operator.
It wasn't long before word spread about the conflict between North and South Viet Nam and rumors of United States involvement. California Marines are the 1st Marine Division and they were soon busy preparing to convoy by ship to Viet Nam with a stop in Okinawa for about two months. Henderson was with the Marines who landed on the coast of Viet Nam at Chu Lai, just south of Da Nang, in the dark hours of night for the largest assault landing since Inchon, Korea.
Henderson stated "We had to jump over the sides of the landing boats with 80 pound backpacks, weapons and  for me, a radio backpack, into the rocky shoreline and wade to land with the only light coming from flares used on the hill where Marines were in combat with the Viet Cong regulars in Operation Starlight, the first battle of US troops in Viet Nam."
While in Viet Nam, Henderson was involved in operations in Tam Ky, Hue and Bien Hua, His original three year enlistment was extended three months and he spent thirteen months in Viet Nam before returning to the US, where he was sent to Camp LeJeune, NC until the end of his enlistment. Henderson naturalized as a US citizen while employed as a police officer in Park Forest, IL. He married Jane Eaton-Henderson shortly after the end of his military enlistment. They were blessed with their daughter, Shannon in 1969. Henderson with his wife Jane and daughter Shannon, moved from Illinois in 2000 to Butler County  after 30 years of service to the Park Forest Police Dept. Henderson is currently employed at Western Kentucky University in the Parking and Transportation Dept.
Geoff and Jane are members of Aberdeen Missionary Baptist Church. Geoff is President of the Butler County Education Preservation Society. He is also a member of the Veterans of Foreign Wars Post 5837 and Jane is a member of the VFW Ladies Auxiliary 5837.
Geoff enjoys the quiet and peaceful life he and Jane have found on the farm in Quality after hustle and bustle of city life.

Submitted by Chad Bridges (not verified) on Mon, 12/11/2012 - 6:24am
Couldnt have chose a better candidate if Geoffrey is half the soldier he is a citizen he would have been outstanding he is a great christian man and mentor congratulations Geoffrey Semper Fi
Submitted by Jennifer Odle (not verified) on Mon, 12/11/2012 - 10:19am
A nicer person you will never meet as Geoff Henderson. Butler County is lucky that they chose us as a place to live and be a part of our community.