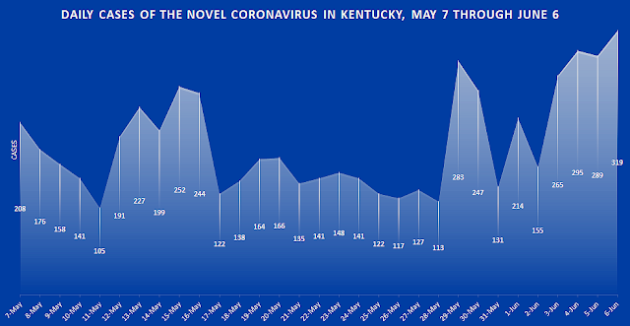 Gov. Andy Beshear announced 319 new cases of the coronavirus on Saturday, one of the highest numbers the state has seen in weeks.

“The virus is still out there. I know we’re tired. I know we all just want to have a normal summer,” Beshear said in a news release. “But we’ve already saved so many lives as Team Kentucky and we can’t let up now.”

That was the closest he came in his news release to addressing the rising trend.

The last day that more than 319 cases were reported was May 5, when Beshear announced 625 new cases, with 309 of them from a Western Kentucky prison and 316 from the general public.  Before that, the highest daily number of cases was April 19, at 322.

After two weeks of general decline, the state began seeing rises in cases May 29, when 283 were reported. Including that day, seven of the last nine days have had case numbers higher than 213.

It will be important to watch these numbers as the state continues to reopen its economy, and in the wake of protests of police violence and racial injustice.

Mother's Day was May 10, a date that likely increased contacts among people who hadn't seen each other in some time, and it was also the first Sunday that Kentucky churches were authorized to hold in-person services. Kentucky began reopening its economy on May 11; that was 18 days before the numbers started jumping, and the incubation period for the virus can be two weeks or more.

Beshear has incrementally allowed new openings every few days since May 11. Educational and cultural activities, horse shows and some in-home childcare are scheduled to re-open Monday, June 8. Nightly protests in Louisville and Lexington are into their second week.

The state’s daily update shows that 207 of the new cases are in Kentucky’s most densely populated county, Jefferson, which had 65 percent of Saturday's total. The county has reported high numbers for several days, reporting 149 new cases on Friday and 88 new cases Saturday.

The 319 cases added Saturday brought the state's adjusted total to 11,287, with at least 3,344 of them having recovered. The daily report shows that 495 people are in the hospital and 75 are in intensive care.

The long-term care facility update was last updated Friday, June 5. It showed that 1,405 residents and 645 staff members had ever tested positive for the virus, and 288 residents and three employees have died from it.