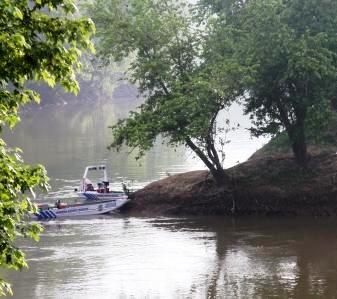 UPDATE 4/22/13: An arrest has been made in year old death investigation.  Police have charged 19-year-old Daniel Hostetler of Metcalfe County with first degree manslaughter in the death of Brandon Crain, whose body was found in the Green River.

UPDATE: 5/3/12 According to Butler County Coroner Marty Jones, the male subject found in Green River has been identified as Brandon Tyler Crain, 19, of Munfordville in Hart County. Crain was last seen around 2:00 am on January 26, 2012 in Munfordville, Kentucky.

Original Story: The body of a male was discovered Saturday afternoon by Robert Cook and his grandson while fishing in the Green River approximately half a mile from the Woodbury Boat Ramp.  The call came into dispatch at 2:14pm and Butler County Sheriff Deputy Chris Reneer responded.  Reneer responded with the fishermen to the location of the body in the men’s boat, along with Butler County EMS personnel.

According to authorities the body had been in the water for some time.  Butler County Coroner Marty Jones recovered the body from the water and the body has been taken to the Office of the Kentucky Medical Examiner for autopsy.

Kentucky State Police is in charge of the ongoing investigation.