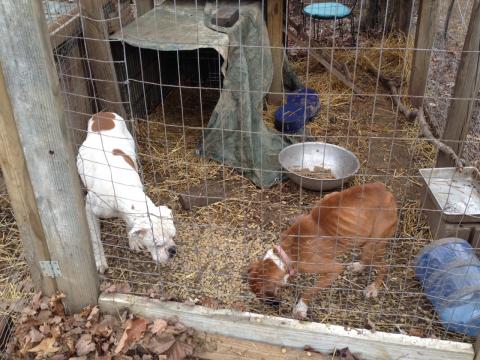 UPDATE: Sandra Clark and Craig Clark pled guilty to second degree animal cruelty in Butler County Court.  The pair was sentenced to 180 days of jail time, must pay the veterinarian bills totaling more than $1,000, paid the Butler County Animal Shelter for housing the animals, and are expected to make a $250 donation to the Shelter.

The jail time and $250 of their fine was suspended under the following conditions:

12/10/14: Animals found neglected and starving at a Rochester residence is expected to lead to charges of animal cruelty being filed against the homeowner, Sandra G. Clark, who is denying the charges.

Yesterday, Tuesday, December 9, neighbors discovered what appeared to be several abused, neglected, and starving animals at 339 Ferry Street in Rochester.  At approximately 9 a.m., Butler County Sheriff's Deputy Heath West received a call from Mike Porter, a Rochester resident, reporting animal abuse.  Deputy West, upon arrival at the scene, discovered two dead ducks, dead chickens, live chickens eating the dead ones, rabbits, three dogs (Boxers), and a puppy in a cage on the porch.  Nobody was home at the house and there was one dog inside the home.  According to West, the dogs were clearly "emaciated" and no food or water was found on the premises.
West contacted Clark, who is employed by Southern Health Partners, as a Licensed Practical Nurse, at the Warren County Jail.  Clark denied the claims and told West that she had been taking care of the animals.

Meanwhile, neighbors fed and watered the animals.  Four dogs and two rabbits were taken to the Butler County Animal Shelter.
Deputy Trey Flener returned to the home last night and spoke with Clark, who again denied the charges of animal cruelty and says she has receipts showing where she has bought food for the animals in question. The dog inside the home appeared to be is good shape according to Deputy Flener.

Clark is separated from husband Craig Clark, who currently lives in Shepherdsville.  According to West, Craig Clark stated that he has not lived at the residence since early November adn that she (Sandra Clark) was supposed to be taking care of the animals.
Deputy West has contacted Butler County Attorney Richard "Dick" Deye about the matter and a charge of cruelty to animals is expected to be filed against both Sandra Clark and Craig Clark.