Unveiling The Restoration of the 1913 Superintendent's House 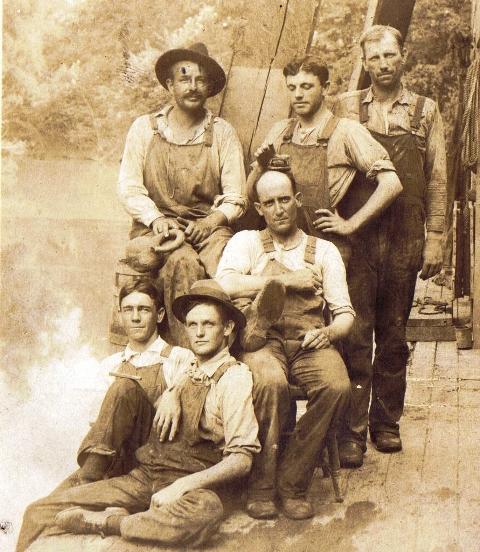 Honoring the Family of Captain James W. Burch Saturday, October 15, 2:00 – 4:00 pm
On Saturday, October 15, the Green River Museum will host its annual fall open house, this year honoring the second family to live in the historic Superintendent's House, the James W. Burch family.( pictured above with men  in 1925) Completed in 1913, the Superintendent’s House in Woodbury, Kentucky, was built by the Corps of Engineers as a residence for the Superintendent of the Green River system.  Last year the museum honored the William S. Overstreet family as first residents of the house.

James W. Burch (1872-1935), his wife Fannie McReynolds Burch (1878-1966), and their five children occupied the Superintendent’s House from 1921 until 1932.  Completed in 1913, the federal government-constructed house was one of the largest and finest in the Green River region, complete with electric power, indoor plumbing, and a coal-fired furnace.  Upon retirement, Captain Burch and his family decided to remain in Woodbury.  They moved to the historic home “Windswept” in 1932 and the Burch family continued to live there until 2005.  Descendents of the Burch’s five children (Loucille, James, Mary, Martha, and Jessie Frances or “High Stepper”) will be in attendance for Saturday’s event.
The Green River Museum will unveil the recent restoration of the living room and dining room of the Arts and Crafts-style Superintendent’s Residence at 2:30 pm.  Last year the four bedrooms and bathroom on the home’s second floor were restored and opened to the public for the first time. Interpreted to the 1920s, the house has been restored using objects that have connections to Butler County history.  The kitchen remains to be restored.
Come out and help celebrate our county's past, meet members of Captain Burch’s family, and participate in the unveiling of the restoration of the living room and dining room of the house. The reception will be from 2:00 pm until 4:00 pm; the unveiling taking place at 2:30 pm. Music will be provided by members of the Burch family as well.  For more information call 526-5342. The Green River Museum is located at the Butler County Park in Woodbury.