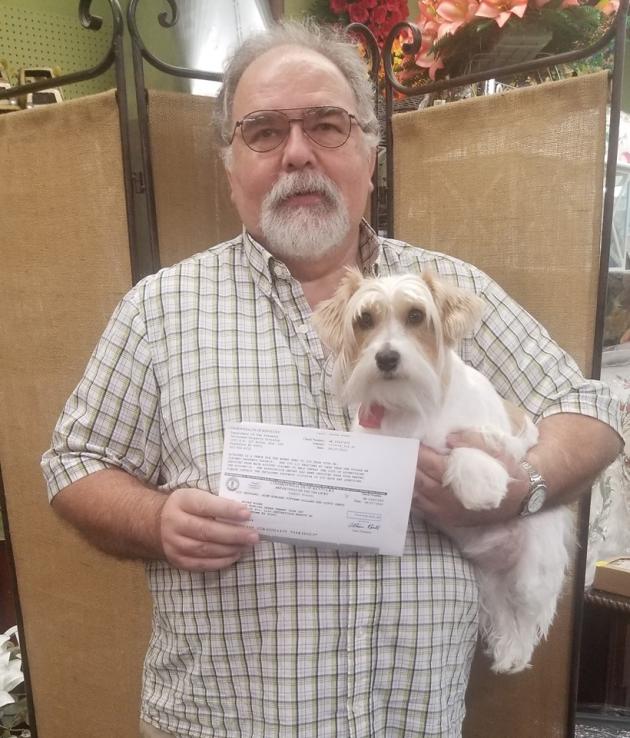 When Roger Moore, of Morgantown, joined the Bowling Green Kennel Club in the early ‘70s, he had no idea that forty-odd years later he would be responsible for dispersing the last of the funds the club had collected.

The Bowling Green Kennel Club was an active organization well into the ‘80s.  The club was formed with a goal to promote the sport of purebred dogs, to offer the community educational programing, and to teach training and obedience conformations for competitions.  Roger Moore was an active member almost from the club’s inception, raising and showing miniature Poodles and Whippets.

Eventually, membership in the club declined because of job relocation and family issues.  Because the club was never officially dissolved, money collected from dues sat in a C.D. and club checking account until it was turned over to the Kentucky State Treasurer as unclaimed property.  Roger, one of the past officers and board members, saw the listing on the Unclaimed Property website in August of 2015.  It was then that he set into motion a plan to obtain the money for the benefit of county-run animal shelters.

Roger contacted Butler County Attorney Richard Deye, for advice.  Mr. Deye contacted the Kentucky State Treasurer then presented Roger with a list of options.  Not certain if any of the options would work, Roger Moore would not be deterred.  He worked his way through the list, finally arriving at the place in which he could contact other former Kennel Club board members in order to have a meeting.  That meeting of the board of directors would have the authority to release the funds.

The process took five years.  Five years of searching for club members from forty years ago, who had relocated, remarried, divorced or even passed away.  On June 12th, 2020, five board members had been located and contacted.  The Bowling Green Kennel Club Board of Directors came together in an online meeting (due to restrictions associated with Covid-19) where they were apprised of the situation.  Documents were mailed, received, signed and sent back to Roger, who, in turn, mailed the collection of documents to the Kentucky State Treasurer.

In August of 2020, a check was issued by the state treasurer for the amount of $6,915.50.  The funds have been turned over to Roger Moore for disbursement among three county animal shelters.  As decided by the Board of Directors of the Bowling Green Kennel Club, equal amounts will be donated to Bowling Green-Warren County Humane Society, Barren River Animal Welfare Association, and Butler County Animal Shelter.  The monetary donation comes to $2,305.18 each (Roger furnished the extra four cents to make the portions equal).

Five years ago, Roger Moore took on this project single-handedly, not knowing if he would be able to reach his goal of obtaining unclaimed funds for the benefit of local animal shelters.  How does he view the process now?  “It was well worth the endless hours it took for the welfare of a lot of animals,” he says.