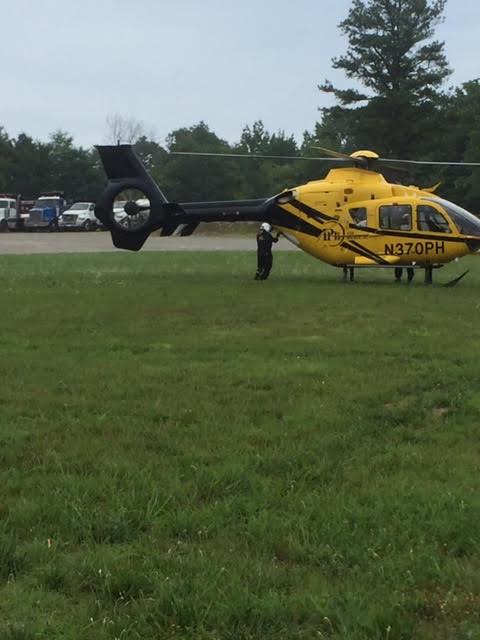 A midday Monday collision on Beaver Dam Road (U.S. 231, about 5 miles north of Morgantown) has resulted in the death of 16-year-old Nevaeh Woosley.

The accident involved a 2005 Hyundai Sonata driven by Jimmy D. Clark Jr. (DOB 7/11/03, of Morgantown). Deserae Clark and Nevaeh Woosley were passengers in the vehicle.  However, Jimmy Clark told officers at the and later at the hospital that the only occupants in the vehicle were himself and his sister, Deserae Clark.

The other vehicle was a 2013 Chevy Silverado 3500 that was pulling a loaded 25-foot trailer. It was operated by Christopher B. Jones (DOB 7/1/77, of Bowling Green).  Aaron M. Jones was a passenger.

According to a police report provided by the Butler County Sheriff’s Department, the investigating agency, Clark’s Sonata was traveling in the north-bound lane when he apparently lost control of the vehicle and entered into the opposite lane and eventually impacted a guardrail.

The Chevy pickup saw the vehicle enter into his lane.  The operator told police that he attempted to avoid the collision by braking and traveling in the other lane but was unable to do so.  His vehicle struck the Sonata in its back passenger side and then continued on to hit a guardrail.  The report indicates that the Hyundai Sonata came to final rest  approximately 105 feet from the point of contact.

According to the accident report, Jimmy Clark told police that he and his sister, Deserae, were the only occupants of the vehicle.  Jimmy Clark was transported to the Medical Center in Bowling Green by Butler County EMS.  Deserae was taken by PHI Air Medical to Vanderbilt Childrens’ Hospital. Christopher Jones and Aaron Jones refused transport to the hospital by Butler County EMS.

At approximately 3:30 p.m., the Butler County Sheriff’s Department received a call from Chuck Porter stating that his granddaughter, Nevaeh Woosley, was supposed to have been one of the occupants with the Clarks.  Porter said she (Nevaeh) had been picked up by Clark at around 12:30 p.m.  Butler County Sheriff’s Deputy Trey Flener, the investigating officer, contacted Clark again regarding whether or not Nevaeh Woosley was an occupant in the vehicle based on the information provided by Chuck Porter.  Clark told officers that he had dropped her off at her home after summer school and that she was not in his vehicle.  Mr. Porter stated that they did return home but had all left together again at around 12:30 p.m.

With this information in hand, deputies returned to the scene of the accident and were able to locate Nevaeh Woosley at approximately 4:17 p.m., which was over three hours after the initial accident.  The accident report states that Woosley appeared to have been ejected from the back seat through the back window.  Inspection of the vehicles and photos indicate she was wearing a seatbelt. Woosely was pronounced dead at the scene by Butler County Coroner Marty Jones.

Kentucky State Police Trooper Jason Adkison went to the Medical Center in Bowling Green to request a “blood draw” from Jimmy Clark.   Clark consented to the blood test and signed an implied consent waiver.  The test was mailed to the KSP laboratory.  Results are not known at this time.