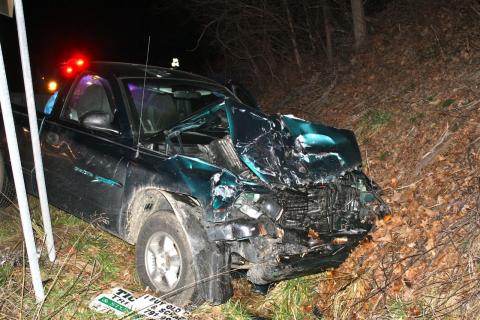 A small pickup truck and a large van collided earlier tonight on U.S. 231 in front of Aberdeen Grocery.  Although substantial damage was done to both vehicles, especially the truck, no significant injuries were reported by either of the individuals involved.

The accident took place at approximately 7:15 p.m.  A green 1997 Dodge Dakota pickup driven by Chelli Moore of Morgantown was traveling north on Beaver Dam Road (U.S. 231) when a 1993 white Ford 250 Econoline van driven by Tim Goff of Morgantown pulled out onto the highway and in front of Moore's truck.  Goff's van was traveling south in front of Aberdeen Grocery on KY 79 and had stopped at the stop sign before pulling out onto U.S. 231.  In the ensuing collision, the van drove the truck across and off the road into a shallow ditch.  Mark Johnson was a passenger in Moore's truck.

"We were driving down the road to get a pack of cigarettes and the van just pulled out in front of me," said Moore.

Goff said he saw the truck but that it was going faster than he thought.