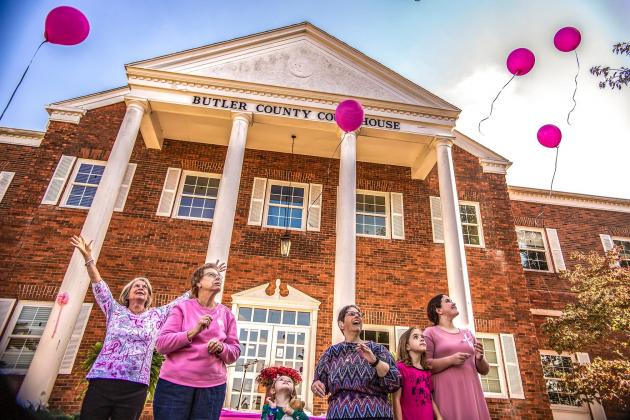 Those no longer living shone down on their families and survivors with sunlight and blessed those gathered with beautiful weather as several gathered for the 9th Annual Turn Morgantown Pink on the courthouse lawn.  Each year these wonderful individuals come together to celebrate survivors, memories of those who lost their fight, and to create a united front in the hope and prayer for a cure, not only for breast cancer but for all cancers.  Originally created by Audrey Pendley, this event has grown each year, allowing survivors, those currently fighting, and their supporters to connect.  This event is always held during the month of October, which is also National Breast Cancer Awareness Month.

The emcee for the program was Becky Hankins, a survivor herself.  She introduced all the speakers for the afternoon as well as speaking about her own experience and thanking all those who help organize the event each year.  To begin the program, Kim Moore, also a breast cancer survivor, led prayer.

After prayer, Maggie Drake, whose mother Shanna Drake is a survivor, played guitar and sang Eagle When She Flies in tribute to all those who have fought against cancer.

Each year a survivor is asked to share their story.  This year the honor was given to Patty Harrison Glass.  You could see immediately as Patty stepped to the mic that she is a jovial woman, as she said she has always been a talker, just not a speaker.  After a brief pause, she began to tell her story which began on August 16, 2018 which was her yearly exam.  After her exam, four days later she received a call advising her for a follow-up, then a biopsy, then to consult a surgeon.  She spoke of how it is not just the procedure that is overwhelming, it’s the tests, the stress, and the worry.  She spoke strongly, advising all woman to make sure they are adamant about early detection.

Survivors and those who have passed are remembered in ceremonies at the program.  Mahkala Burden read each survivor’s name as Audrey Pendley handed them a pink flower.  Survivors in attendance were as follows:

It is also imperative to remember those who lost their battle with breast cancer and to keep their memory alive, those individuals were also remembered, and their family members given pink flowers as well.  After they were recognized, a moment of silence was observed in their memory.  Those lost were as follows:

In closing, Becky Hankins read a poem written by survivor Tina Porter called “Why We Turn Morgantown Pink”.  The poem is a depiction of why the community comes together, the need for support, and a search for the cure. At the close of the poem all attendees came together to release the several pink balloons that decorated the courthouse lawn, essentially turning Morgantown pink as they drifted over the sky.