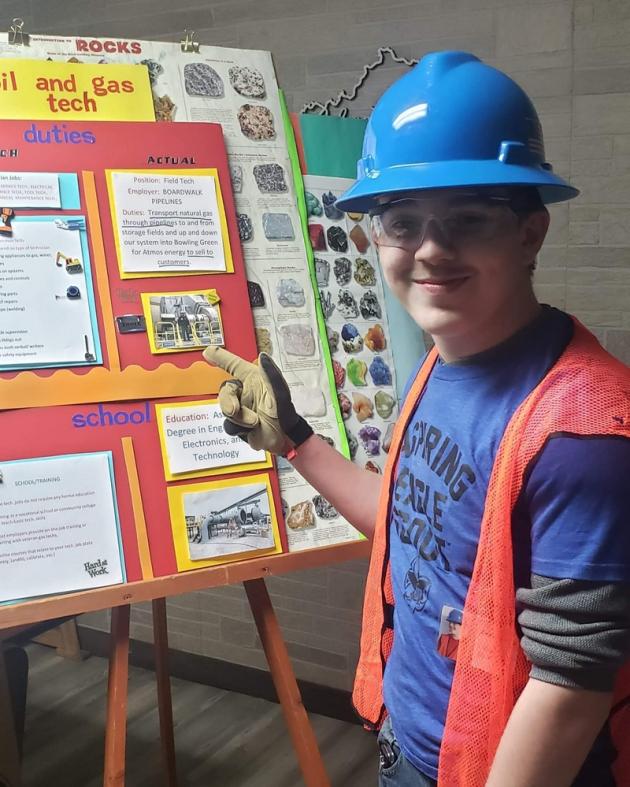 The Scouts have been busy during the pandemic completing several Merit Badges. Modern geology is only two hundred years old and includes the study of rocks, minerals, fossils, and the theories of how the earth was formed and what effects human civilization has had on the planet. County Surveyor Cody Henderson let the scout's borrow some USGS maps of Butler County, which show where strip mining for coal was performed here over fifty years ago and underground mining over one hundred years ago. There are still a few active oil wells in the west part of the County.

Our County's most notable geologic feature is the sixty miles of the Green River that winds through the area. In Kentucky's ancient past, we were covered by a shallow sea. Billions of microscopic marine creatures lived and died, leaving behind their shell bodies. This is one of the ways that limestone was formed. Oil and Natural Gas are just two of the resources we derive from ancient seas. A freshwater swamp also covered Kentucky, billions of trees and plants living and dying, building up many layers, pressure and heat converted these layers to coal.

Only one hour east of Morgantown is Mammoth Cave, the most extensive system in the world. Last year they discovered shark fossils and were researching to help understand ancient life on earth. The Scouts are going camping there and hopefully will look at the area with new insight. It would help if you liked the outdoors to pursue a career in Geology, Paleontology, Marine Technicians, Petroleum Engineering, Volcanology

, Glaciologists, Geological Surveying are just a few of the many jobs available.

Scout Don Elmore did a presentation on coal. It's used in the TVA Plants to provide reliable electricity to our community, he also talked about the importance of Personal Protective Equipment to workers. He recreated some Roman Concrete, the Romans did not invent concrete, but they did perfect it and even figured out how to make concrete underwater for their many bridge projects. The Egyptians, Greeks, Roman's and Mayans were just a few of the many ancient civilizations that discovered the process of heating limestone in a fire, then adding water and aggregates like volcanic rock, gravel, or shells to create something that will last hundreds of years.

One of the newest Scouts, Michael Hlavacek, told the group how copper is mined and processed, how important it is in everyday life. Copper wire, pipes, starters, and electronic devices are just a few.

He also talked about studying ice and glaciers. Antarctica and the Artic hold most of the planet's fresh water, some of the ice on Antarctica is three miles deep, and it can get down to 128 degrees below zero.

Cayden Taylor and James Jones talked about the educational requirements, personal protective equipment, different types of mining, and field training for getting into the field of Geology.

Big Bone Lick, a State Park in eastern Kentucky where thousands of Ice Age Fossils have been preserved in the natural swamp salt lick which trapped Mammoths, Mastodons

Bison, Horses, and many other animals sank into the soft soil and couldn't escape. Falls of Ohio, located near Louisville on the river, were created by ancient sea life, coral, sponges, shells, and other sea creatures. The water level drops twenty-six feet in a few miles, larger ships would unload, and workers would haul the cargo to the other end of the falls and reload onto a boat that would take it to ports downriver. Kentucky is rich in geologic history. The Scouts will visit the Martin Marietta Limestone Mine in Bowling Green on April 7th to begin the Mining in Society Merit Badge. Did you know there are over fifty minerals in your cell phone?

Check out Scout Me In for information on Scouting.