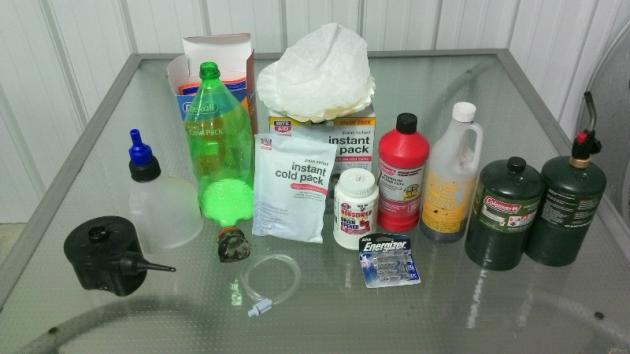 What started as a mobile home fire in north Butler County has resulted in the arrest of two individuals for manufacturing methamphetamine.  Barry and Sherry Joiner of 6863 Caneyville Road are both facing meth charges after a fire broke out at their mobile home across from the 5th District Fire Department.

A 911 call was made last night, Monday, March 9, reporting excessive smoke coming from the trailer.  Firefighters with the 5th District and Morgantown departments responded, along with Butler County Sheriff's Deputy Chris Reneer. After the flames of the fire were extinguished, firemen reported a suspected methamphetamine lab in the bathroom.
"I cleared the residence checking for more victims of the fire and observed several items used to manufacture meth in plain view," said Deputy Reneer.  "A search warrant was obtained and peeled lithium batteries, drain cleaner, coffee filters, cold packs, plastic tubing, a crock pot, Coleman fuel, and a melted one-step bottle were located during the search,"  added Reneer.
Butler County Sheriff's Deputy Heath West, Joe Alford, Dillon Bryant, and Arson Investigator Charlie Tomes were called in to assist with clean-up efforts.
According to Deputy West, it appears that a "one-step shake-and-bake Gatorade bottle" was used and resulted in a flammable chemical reaction.  The bottle appeared to be thrown in the bathtub and a blanket thrown over it, resulting in the fire.

Both Joiners - Barry and Sherry - were arrested and lodged in the Butler County Jail.
Butler County EMS also responded to the scene.