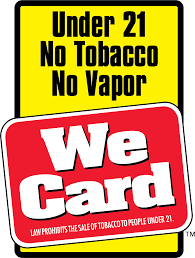 You must now be 21 or older to purchase tobacco products, according to the FDA.

Earlier this month, the United States Food and Drug Administration announced the federal minimum age to purchase tobacco products is 21, up from 18. The new minimum age applies to all tobacco products, including e-cigarettes and vaping cartridges, according to the FDA's website.

The new law comes after President Donald Trump signed legislation to amend the Federal Food, Drug and Cosmetic Act, which also included $1.4 billion reserved for building the U.S.-Mexico border wall and $25 million for gun violence research, according to USA Today. It had bipartisan support, being introduced in May by Republican Senate Majority Leader Mitch McConnell and Sen. Tim Kaine, a Virginia Democrat.

Now numerous tobacco shops and retailers across the nation must change their policies and procedures to abide by the new law. At the manager of one local tobacco shop said the new regulations would impact the business.

Elizabeth Leary, manager of River's Edge Tobacco Outlet in Owensboro, said 20% to 30% of her clientele is in the 18-to-20-year-old range and will no longer be allowed to purchase tobacco products under the new law.

Numerous states have already passed similar laws, including nearby Ohio, Illinois and Virginia. Leary said it was only a matter of time before a similar law affected Kentucky, especially with the recent controversy surrounding vaping products. Those who vape will now have to ask adults to buy vaping products for them, Leary said. Her store also sells vaping products in addition to tobacco.

"It makes it a little bit harder on them," she said.

The timing of when the new law will be implemented is unclear. The FDA's website displays the message "(i)t is now illegal for a retailer to sell any tobacco product -- including cigarettes, cigars and e-cigarettes -- to anyone under 21. FDA will provide additional details on this issue as they become available."

However, agencies such as the National Association of Convenience Stores have asked for the FDA to delay enforcing the new minimum purchase age law until implementing regulations are finalized.

"While FDA must identify all of its regulations, guidance, webpages and other documents that need to be updated with a new age requirement, businesses have significant work to do too. Retailers, for example, must update training materials and signage. Then, they must train millions of employees across the country," read a portion of a letter to the FDA from the National Association of Convenience Stores and other organizations.

Leary said the store has already adopted the new law as a policy. This has upset some customers, she noted.

"It's just a matter of time before it comes anyway so you might else well get used to it," she said.

News outlets such as Vox have published stories suggesting the age change could improve the health of others and could curtail vaping among teens, but Leary disagrees.

"They're going to find a way. You can change the laws all you want but people find a way to get what they want, one way or another. And what the scary part is if they can't come here and get something that's legit, they'll go in the back alleys and get the stuff that's been causing people to get sick."

But Leary does hope she sees a change in smoking habits among younger people.

"I hate it when I see the younger people smoking. It's just a bad habit from what I've seen and I hope it does put a dent in it but just like with everything, they find a way around it," she said.

Local school systems say they will be minimally affected as tobacco products are banned on their properties anyway. Beginning July 1, the use of tobacco products in all Kentucky public schools will be banned.

Jared Revlett, public information officer for Owensboro Public Schools, said the new law could curtail vaping usage among teens but it is not a be-all and end-all solution.

"The kids that are getting their hands on it, a lot of them aren't of age as it is anyway," he said.

"Nobody, staff or visitors or anybody regardless of age is allowed to smoke or vape on school property," she said.