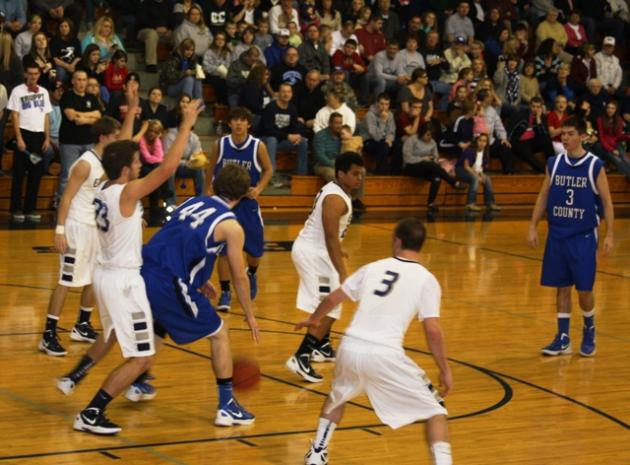 The Butler County Bears took a short trip up Highway 231 Tuesday night to take on former district rival Ohio County. The two bitter rivals have renewed their basketball series in recent years after a hiatus caused by bad blood between the two schools and unsportsmanlike conduct during and after games.

According to OCHS officials the crowd was their largest of the year on Tuesday to see the 20-2 Eagles take on the 8-13 Bears. The Eagles started strong in what would prove to be a fast-paced game. Trevor Lewis and Josh Worsham opened the scoring for the Eagles and jumped out to a 9-2 lead on the Bears. The rowdy crowd hit a fever pitch when BCHS coach Greg Woodcock was forced to call an early timeout to settle down the Bears. After the time out the Bears’ man-to-man defense began to slow the Eagles and Zeke Woodcock and Jackson Washer shot BCHS back into the game. The once boisterous crowd was stunned to near silence as the Bears reeled off an 11-1 run to take the lead 13-10 with under two minutes to play in the first period. The Eagles got the final basket of the quarter to retie the game, but the momentum was on the side of the Bears as the first period ended with score tied at 16.

Logan Bowman kept the Eagles in the game in the second period in the face of a furious BCHS effort. Bowman scored 8 of Ohio County’s nine points in the period. For BCHS a strong team effort led to 11 points in the period and a 27-25 lead at halftime. The effort of the Bears was so strong it prompted Beechtree Radio color commentator Diane Dyer to comment, “This team has finally shown everyone just how well they’re capable of playing.” Zeke Woodcock led the Bears in scoring in the first half with 8 points. Washer and Trevor Jenkins had 7 each for the Bears.

Whatever Coach Paul Decker told his Eagles at halftime worked. Bowman and Lewis came out as a two-man wrecking crew in the third period. The Eagles ripped off 9 straight points to open a 34-27 lead before Woodcock quieted the rowdy Eagles’ fans with a long three-pointer to make the game 34-30 in favor of Ohio County. Once again BCHS responded to Ohio County’s run, and cut the lead to 40-36 with 4.2 seconds to go in the third. That’s when Elijah Flener stripped the ball from Logan Bowman on the Ohio County end of the floor, and tied up the other player for the loose ball on the floor. Flener inadvertently rolled over Bowman prompting him to shove Flener on the floor and seemingly kick at him, as well. In the crowd of boys surrounding the two on the floor someone was shoved, and then punches and slaps were exchanged between several players. Coaches from both staffs rushed onto the floor as players attempted to leave the bench areas. Referees and Ohio County School administrators along with the Kentucky State Police, Ohio County Sheriff and the Beaver Dam Police separated the majority of the boys. Ohio County’s Trevor Lewis had to be restrained, then tackled by the head coach, apparently to keep him from rushing the BCHS players. According to Assistant Coach Chad Flener, technical fouls were assessed to Bowman and Goodall, but no foul shots were awarded to either team.  Meanwhile, a BCHS fan was asked to leave and was escorted from the building by the KSP. When action resumed BCHS was unable to score and the period ended with the score 40-36.

When play resumed the Eagles took complete control of the game. Lewis scored ten straight points for Ohio County to open the quarter and the Eagles never looked back. Josh Worsham highlighted the night for Ohio County when he dunked between two Bears on a fast break. The Eagles outscored the Bears 26-13 in the final period, and pulled away to win 66-49.

The Bears were led in scoring by Zeke Woodcock with 17 points. Elijah Flener added 11 for BCHS. The Bears will now be off until Monday, January 30th when they host Trinity High School in a Girl/Boy doubleheader. The game is a Title IX game, meaning the boys will play first and the girls will be featured in the primetime game. The Lady Bears will play host to the Lady Eagles of Ohio County on Thursday night for a JV/Varsity Doubleheader. The first game will start at 6 and the varsity will tip at 7:30. The varsity game will be featured on AM 1570 WLBQ beginning at 7:20 with the pregame show. The game can also be streamed on Beechtreenews.com by clicking the radio icon at the top of any BTN page.