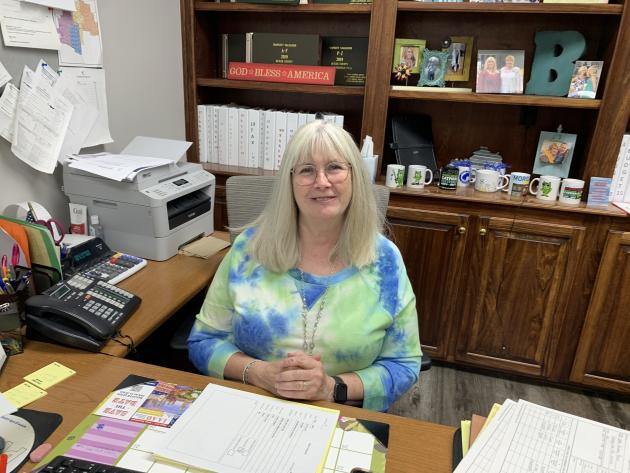 Forty-one years is a long time to work at one place and is rare nowadays.

However, forty-one years is precisely how long Mrs. Suzanne (Phelps) Brosnan has been at the Butler County Courthouse.

She now holds the record of the longest working employee at the Butler County Courthouse.

It all began in October of 1981; Brosnan worked through a summer program run by the unemployment office. This program is no longer active, but at the time, it was an opportunity for youth to participate in various job roles to help them learn skills in the workforce. It was through this program that Suzanne was offered her first job in the courthouse by Judge Wallace Dockery.

During her time at the courthouse, Brosnan has worked for three judges: Judge Wallace Dockery, Judge David Martin, and Judge Hugh Evans. In addition, in 1985, Angie Pendley began work in the PVA office, and Suzanne came with her. Later on, she became the PVA of our county in 2014.

Suzanne has seen several changes during her time in the government building that is the centerpiece of our town. In a day where technology rules everything, Suzanne remembers having to type every tax bill out by hand, W2s, and checks.

She has worn many hats during her time in office and even told me about helping pass out commodities and climbing into drains to rescue a dog and her puppies.

Suzanne will retire on November 30th of this year, and she thanks all her supporters and will cherish the fond memories she has of her time in the courthouse. However, she looks forward to having time for her home projects and spending time with her family.