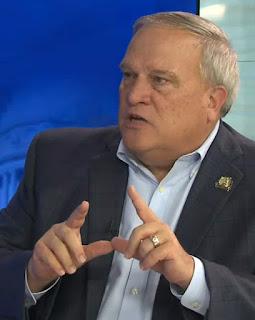 Asked if the legislature would shift the authority for school mandates back to locals, Stivers said, "I can see that very seriously happening, because we've had certain school systems where you have had very successful responses without a mask mandate."

Local school officials "understand what needs to be done, whatever that may be, in their district . . . and do it in a responsible fashion," Stivers said on "Kentucky Newsmakers" on Lexington's WKYT-TV. But he said the legislature might require certain measures depending on the local status of the pandemic.

"You might see protocols that say, as long as you're at this stage, it is a local level, but if it gets above a certain area you have certain guidances that you have to follow," he said.

Asked for a response, Gov. Andy Beshear told Kentucky Health News in an email, "Every public health agency from the CDC to every local health department in Kentucky, as well as the Kentucky Chamber of Commerce, and education organizations across the country know the science is clear. Universal masking is the only safe, responsible way to have in-person learning at this time. This will be a major test of the General Assembly but there is only one right answer. If school districts are not required to or choose not to mask, we will see thousands of quarantines, more sickness amongst kids, and a depleted workforce that doesn't show up to work because their child has to stay home."

The legislature has power to kill the emergency regulation that the Kentucky Board of Education issued Aug. 12, requiring all students and staff in public schools to wear face coverings for the rest of the school year.

On Aug. 10, Beshear, who appointed all members of the board, issued a broader mandate for all schools, saying so few districts had required masks that the threat of contagion and ability to maintain in-person instruction was in danger. He withdrew it after the state Supreme Court upheld laws limiting his emergency powers.

Now the Democratic governor and leaders of the Republican-controlled legislature are discussing a new legal framework for dealing with the pandemic, to be passed in a special legislative session Beshear would call.

"My hope is they have the courage to do the hard things," Beshear said in a separate interview with WKYT, adding later, "Certainly, we're going to collaborate with them. . . . The first thing we need the people of Kentucky to do is to care about each other."

When the state recorded 65 deaths Wednesday, the second most of the pandemic, Beshear said that if not for the court ruling, he would have reinstated the statewide mask mandate that he ended in June. Stivers quickly said there is little legislative support for such a broad mandate, and said likewise in the interview.

"If you're gonna do mandates of that nature, they really should be targeted, based on the positivity rate, other things of that nature," he said. "I think at this point in time we ought to be focusing on shots, behavior modification for those individuals who don't want to take the shots."

Only 48 percent of Kentuckians are fully vaccinated against the coronavirus, and resistance to vaccination is strongest in rural areas like Stivers' district: Whitley, Knox, Clay, Owsley, Lee and Wolfe counties.

Stivers has announced a campaign in his home Clay County with 30 local "influencers" urging people to get vaccinated, vaccination clinics at 13 public schools, drawings for cash prizes to be used for sports equipment in the schools with the highest vaccination rates, wrist bands that say "I took the shot" and coupons for free pizza. Stivers has suggested that the campaign could be used in other areas.

Some of Stivers' fellow Republicans have been openly skeptical of vaccinations and masking, and interviewer Bill Bryant told him some people have said politicians need to work as hard to inform people about vaccination as they do at getting elected.

Stivers replied, "Politicians have been somewhat tainted because they've seen this as more of a national political battle than as a local political battle." He said the state needs a vaccination campaign "that removes politicians" and uses more trusted messengers.

"It would be better for leaders in their communities, be it doctors, be it religious leaders, educators, to step forward with the message," he said, adding later, "There's been a lot of misinformation."

Bryant noted that a pre-filed bill would ban employee vaccine mandates, but Stivers indicated little if any support for that, and implicitly endorsed the vaccine mandates issued recently by hospital chains. He said patients or their families could sue hospitals for "not requiring their people to have shots, knowing that they're dealing with a fragile population," and "Each business needs to look at their policy and set their policy based on what's prudent and reasonable."

Stivers said he expects a special session "at the appropriate time with a measured response," but said it should follow a quick session to redraw legislative districts to conform to the 2020 census, "so we can get that off the board and focus on covid policies and budgets."

The timing and agenda of special sessions is up to the governor, but with their partisan divide, Beshear and legislative leaders are expected to agree on much in advance, such as emergency certifications of health personnel.

The law upheld by the Supreme Court limits governors' emergency orders to 30 days, but Stivers said the legislature could "tier" that authority, allowing certain measures for 30 days, others for 45 days and allowing others to continue until January, when the regular legislative session will begin.

Stivers acknowledged that the public is "extremely divided" on how to tackle the pandemic, but he and Beshear agree on "We need to get shots. how we deal with things after the shots, there may be disagreement."

He said the 10-day limit on non-traditional instruction, which the legislature passed this year, "will have to be revisited" because school districts are already closing temporarily and shifting to NTI because of high case numbers.

Bryant said in introducing the interview that Stivers, "usually careful and deliberate, has handled things in that same cautious way" since the court ruling. House Speaker David Osborne used a similar tone in an email to Kentucky Health News on Wednesday.

"Moving forward, our caucus is going to continue to be deliberate and intentional in how we approach this pandemic," Osborne said, noting that House Joint Resolution 77 in the last session was passed after legislators "evaluated each executive order and emergency regulation issued by the administration to address the pandemic. Ultimately, we ratified the ones that evidence supported were necessary and good. It is our intent to work closely with the administration, hear their recommendations, and work with them as well as other stakeholders to set the policies."