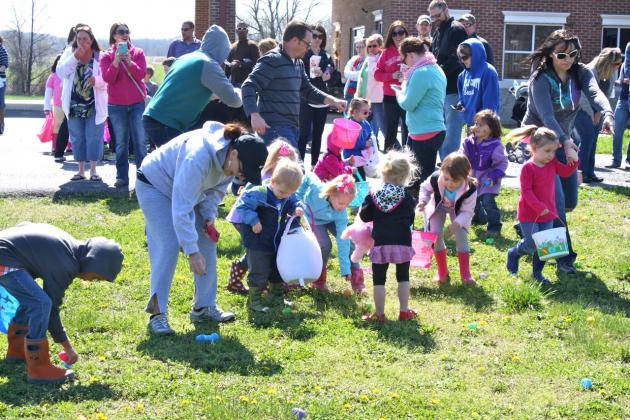 Beginning with an Ash Wednesday service, continuing through Lent toward Good Friday, Morgantown Community Church (MCC) has had a busy spring with more on the horizon.  In keeping with an Easter tradition, the church held its annual Easter Egg hunt on Saturday, April 4.  Dozens of children took part in the event, which featured inflatables, candy and prizes, free food, face painting and more.

"One of our core values at MCC is community--getting people together to form real relationships. Part of that is getting people together at the same place and time," said Josh Scott, senior pastor at MCC.  "Events like our annual Easter Egg Hunt allow for that. Plus, the kids have a blast. It's a fun part of our Easter Weekend."

Partnering with Morgantown Methodist, Salem Baptist, Morgantown Church of the Nazarene, and Morgantown Cumberland Presbyterian, MCC kicked off the Lenten season with an ecumenical Ash Wednesday service - one that had to be postponed a week due to inclement weather.  Then, on Good Friday, the same churches came together again for a special service that featured music, reflective readings, and prayer focusing on the Seven Last Words of Christ.  Both services were held at the Eva J. Hawes Community Building.

"We are so happy to be part of this growing partnership among churches here in Butler County," said Scott.  "For years I, and others, have lamented the lack of opportunities for cooperation between churches and leaders, and it's great to see the unfolding of an ecumenical effort to bring people, regardless of their denominational stripes (or lack thereof), together. Ash Wednesday and Good Friday are just the beginning!"

Finally, on May 24, MCC will host well-known Christian author Brian McLaren. The workshop will consist of three lecture from McLaren, a meal, and a question and response time.  Topics include how we approach the Bible (from his latest book We Make the Road by Walking and the future of Christianity (from A New Kind of Christianity).  The event is scheduled for 3-7 p.m. at the church, which is located at 2882 Bowling Green Road.  There is limited seating; tickets are $30 before April 20 and $40 afterwards.  For more information, go to www.mcconline.org/BrianMcLaren.

"Brian has been one of the most sought after thinkers and speakers for a long time, and we are beyond excited to be hosting him here at MCC. On a personal level, he has played a significant role in my life and in the lives of others in our community, so it's all the more thrilling to have him here," said Scott.  "Our ultimate goal in this is really to create a conversation about things that matter, and Brian is an important voice in that discussion. Our emphasis isn't on everyone agreeing with everything that Brian, or anyone else, says, but on open dialogue and conversation. That's how we learn and grow, and ultimately, it's part of our transformation," added Scott.