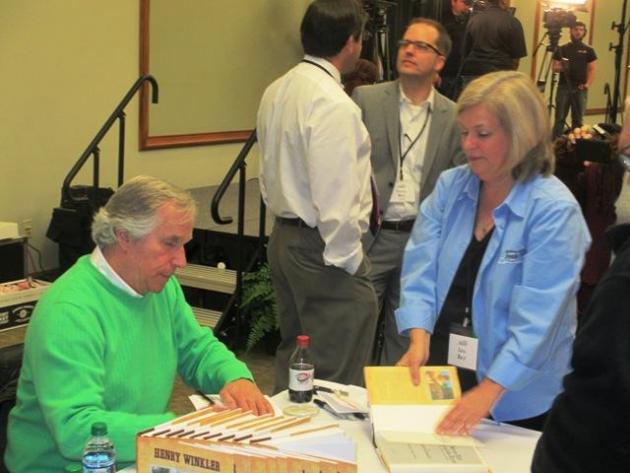 Saturday April 20th, I attended the Southern Kentucky Bookfest at the Carrol Knicely Center in Bowling Green.  Back in January, I read where the legendary Henry Winkler would be one of the speakers.  I determined that I just had to attend.
We had to line up Saturday starting at 7 am.  Tickets were free but there was a limited amount.  If you know me, you know that it takes determination for me to get up at 6 am on a Saturday.  We were some of the first in line, so we got our tickets and headed to Dunkin’ Donuts for breakfast: a chocolate donut and sausage/egg and cheese biscuit with two orange juices for me.
Afterwards, we made our way back to the Knicely Center where we wandered around a bit to kill time.  We were let in at 9:45 for the 10 am presentation.  The presentation lasted approximately an hour.  As Henry Winkler took the stage, he quipped, “Hi. There are seats.  Want to sit down?” That brought the first of many laughs that morning. He spoke of his struggles with dyslexia.  Becoming half-serious, he said “ I use spell-check and the computer says, “Are you joking?”  He said that when he first found out of his diagnosis, he was very angry. He’s happy now. He noted that 1 in 5 kids have a learning challenge.  He also said 70% of those who are incarcerated are dyslexic.
He talked of growing up in New York a son of German parents.  He also talked at length about his time in school.  “I was great at lunch”, he said.  As far as home life was concerned, he said “I’d rather have had my parents’ support.  They called me “dummer hund”, which means “dumb dog” in German.
After he got his iconic role as Arthur Fonzarelli aka “The Fonz”(1974-84), his mother would walk in a store and say “ this is a nice dress, and I’m Fonzi’s mother.”  He said “I met people from all over the world who would say they have my parents’ autographs.”
He said his family took a trip to Europe in the ‘70’s because his mother was ill and they feared she wouldn’t live much longer.  She lived until 1998.
Henry’s still having Happy Days these days.  The actor, producer, director, and author of 22 children’s books (as well as the book I bought and he signed, called I’ve Never Met an Idiot on the River: Reflections On Family, Photography And Fly-Fishing, thrilled young and old alike.  He loves fly-fishing, by the way.  Also, we learned that he hates cats.
After the presentation, he took questions from the audience.  I did not have the guts to ask him how he was enjoying playing Henry Lawson on USA Network’s Royal Pains.  Before I move onto my other meeting, I’ll leave you with a favorite quote from Mr. Winkler’s presentation.  He said “We need everybody to do whatever it is they do(well) to make a great society”.  It was easy to see he was genuinely happy to be there.  I could tell when I met him that he was a warm and caring man.

Also at SOKY Bookfest, I met Wes Berry (www.wesberryliving.com).  Wes is a professor, author, television host and, most importantly, a Kentuckian.  Wes hosts a show called The Local Traveler which can be seen Sundays at 10:35 pm on WBKO-ABC and Mondays at 9:00 pm on WBKO-FOX.  Wes is Kentucky’s version of the Travel Channel’s Adam Richman.  If you’ve ever seen his show Man vs. Food, you’ll get an idea of what I’m talking about.  Wes’ book is titled KY Barbeque.  I was walking the aisles and browsing the books. I doubled back when I saw this book.  I told Wes I love barbeque! We talked for several minutes and I told him about a local place he should try: Smith’s General Store in Rochester. I told him about the daily specials.  He talked like that might be a future stop for the show!
I found both Mr. Berry and Mr. Winkler to be cordial, personable, and down to earth.  This is my second Southern Kentucky Bookfest and look forward to attending more in the future.  I hear they’re already planning for next year.  My suggestions: David Baldacci and Dave Barry.

Hello, my name is Andy Sullivan. I received my bachelor’s degree in business from Mid-Continent University in May 2009. I began writing for Beech Tree News in July 2009.  I enjoy playing guitar, the occasional Wii game, writing, and listening to music. I write a sports blog that can be found at http://andyuk79.tumblr.com
If you have a comment, feel free to leave it in the space below.