SOFTBALL: Butler bows out of regional tournament with 7-4 loss to Catholic 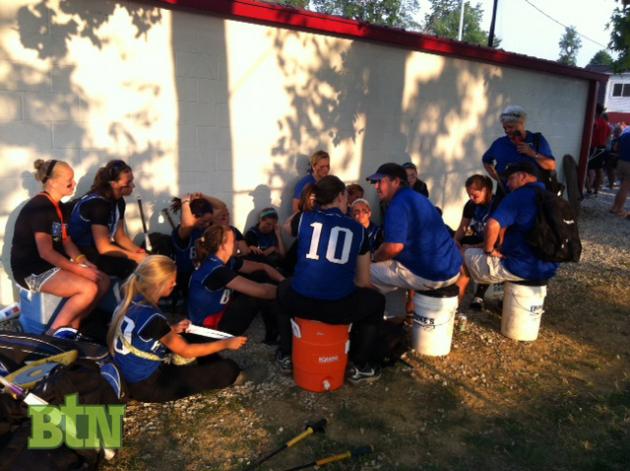 Butler County fell behind early and rallied late before falling 7-4 to Owensboro Catholic on Monday in the Third Region Softball Tournament at Daviess County High School.

Catholic (27-10) scored two runs in the bottom of the first to take an early lead.  Butler answered with a run on third on a sac fly by Hannah Peach that scored Madeline Drake.

Trailing 2-1, the third inning proved to be the decisive one as the Lady Aces exploded for four runs to take a 6-1 lead.  Another run in the fifth extended Catholic's lead to 7-1.

However, the Bears were not finished.  Hannah Peach and Jazmin Reynolds singled and doubled, respectively, in the bottom of the seventh inning to plate three runs.  The inning opened with a double by Drake.  Morgan Manning then singled advancing Drake to third.  Peach's single scored Drake and then Reynolds' double to left scored both runners - Naomi Cade and Allie Howard - who were pinch runners for Manning and Peach.

With two outs, a gapper to left-center by Payton Grubb, who had seven catches in center field, was caught by the diving left-fielder to end the game.

Pitcher Morgan Manning allowed 13 hits and five earned runs through six innings.  She struck out one batter and walked none.

Defensively, Reynolds made a diving catch in left and catcher Amy Rogers threw out a stealing base runner at second and had a sac bunt.  Shortstop Drake snagged a hard line drive and made a sharp throw to Peach at first for the inning-ending double-play in the second.

"We played pretty good game overall — offensively, defensively, and pitching — but had trouble getting timely hits early in the game," said Butler County coach John Embry.  "I was really impressed with how our girls battled to the end and never gave up.  Trailing 7-1 to a team like Catholic, they could have given up — but they didn't — and that says a lot about their character and toughness."

The loss ends the 2012 season for Butler County, who finished with a 22-17 record, a 12th District runner-up trophy, and a fifth consecutive trip to the Third Region Tournament.

"This team has faced many challenges this season, including injuries, in addition to having to rebuild from key losses from last year," said Embry.  "All along, they've battled on the field, stayed positive when faced with setbacks, worked hard every day, and have come together as a team to face obstacles together.  I"m proud of each member of our team and what they have accomplished this season.  They are a class act."