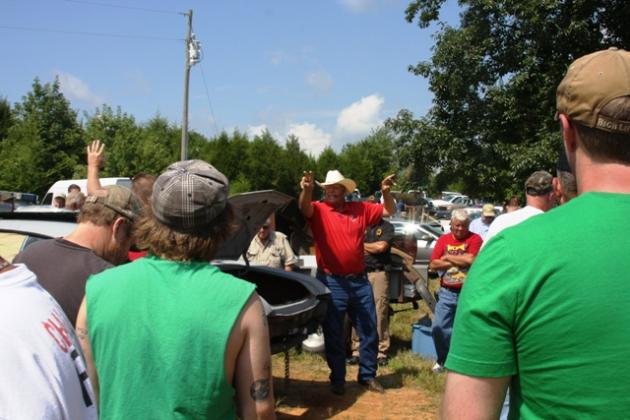 On Saturday, July 27, a court-ordered sale by the Butler County Sheriff’s Department was held at 12301 Russellville Road, the same location of an early morning shooting on June 24, 2012.  Sheriff Scottie Ward was named by the court as Administrator of the Estate of Justin Boord on October 23, 2012.

According to Ward, he was court ordered on June 6, 2013, to sell the personal property belonging to Justin "Scott" Boord.

“The real property (land, house, barn, trailer) was owned by Arlene Bodza, Justin Boord’s mother, and was not part of the court-ordered sale,” said Ward.

Mrs. Bodza had previously listed her real property with McPherson Realty, who works in conjunction with Ken Byrd Auctions.  This led to the combined sale of personal property and real estate at the site.

According to Ward, the money from the sale of personal property, $61,179, will be placed in an account and the court will determine how and when the funds will be dispensed. The Butler County Sheriff’s Department will receive five percent of the $61,179.

Justin “Scott” Boord, 47, died on June 28, 2012 as a result of the gunshot wound.  His wife, Kathy M. Boord,  was later indicted by the Butler County Grand Jury on the following charges: murder, tampering with physical evidence, possession of marijuana, firearm enhanced.  She is currently out of jail on bail awaiting trial.