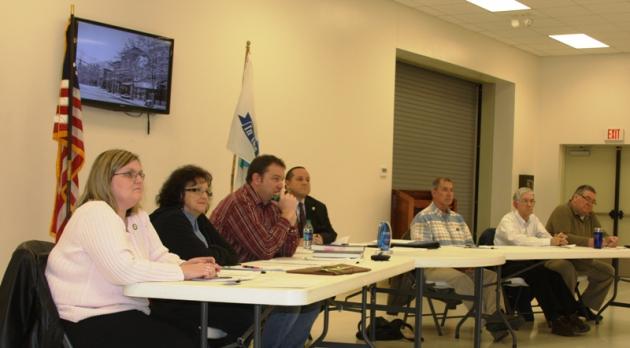 With all members of the council present they quickly got down to business.  First was recognition of the United Way Award.  Ellie Harbaugh, Senior Director of Resource Development at United Way of Southern Kentucky Inc., was on hand to present Mayor Billy Phelps a United Way Award.

“I am so excited to be here in my home county.  United Way was able to donate over $18,000 to organizations in Butler County last year,” said Harbaugh.  “This award is to the city employees, who have raised over $1,000 for United Way.”

Anita Jenkins , Director of the Housing Authority,  spoke to the council concerning “The New Flat Rent Law.” According to Jenkins, the new law would cause rent to double on about 180 families.

“About 57 families would have had to move, and we couldn’t let that happen,” said Jenkins.

“Hopefully, we have found a fix to the flawed law, some of our families will still see a five percent increase the first year in their rent,” said Jenkins.

Mayor Phelps gave his monthly report stating that he and Councilmember Sharon Johnson traveled to Frankfort and met with several officials.

“We had several meetings and there are some possible grants we may be able to obtain,” said Mayor Phelps.

Also, the paper work from Kentucky Copper has been finalized stating they plan to make their first payment by February 15th with the balance by March 31st.

“There were no significant findings, The city received an unqualified opinion, which is the best you can receive,” said Gilbert. You have spent more that you brought in, not a bad thing but you can’t keep doing that,” added Gilbert. Note: Revenues $2,303,808; Expenditures $2,332,035; Deficiency of (28,227)

According to Gilbert, the audit needs to include the Industrial Holding Corporation and the Utilities Commission in order to get a complete picture of the city. Kendall Embry, CPA of Embry & Watts, was also on hand to answer questions from the city.

-Councilmember Dionne Merritt said she has been asked by several people about the lack of availability of the Recycle Bins.

“They want to use them (recycle bins)but they are not,” said Merritt.

Third District Magistrate Chad Tyree was in attendance and stated the Fiscal Court is working on a solution to the problem.

“We hope to be able to speed up the process of ending the bins and keeping them available,” said Tyree.

-The council is responsible for setting the salaries of all appointed boards and must be done by an ordinance.  According to Mayor Phelps the salaries for the Utilities Commission was not handled correctlyand has to be set by an ordinance.  The Utilities Commission is currently the highest paid board in the city, making $418.69 per month.  Councilmember Russell Givens made the motion to lower the salary to $200 per month, Gary Southerland seconded the motion.

Mayor Phelps called for a roll call vote.  Givens and Southerland voted in favor of the motion, Merritt, Johnson, Rondal Givens, and Meredith voted nay.  The motion failed on a 4-2 vote.

The Council approved the following:

Pickup will be on Mondays, Yard Waste includes grass clippings, sweepings and pruning from trees and shrubs. Yard waste must be cut to lengths not exceeding 5 feet and each limb should not be wider than 6 inches. Smaller limbs should be bundled. In the city of Morgantown brush must be stacked neatly and placed curbside for pickup. The city will pickup as much as 3 cubic yards of brush. The city will only pick up brush that has been cut or trimmed by the homeowners (any contracted, lawn service, landscaper, or individual doing the work for the homeowner is required to dispose of all brush themselves.)