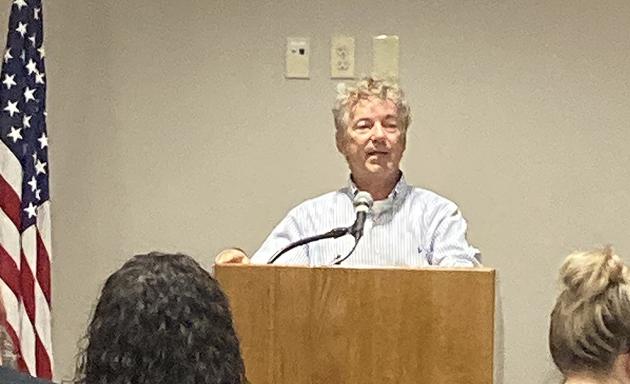 Senator Rand Paul stopped in Butler County on Wednesday afternoon, September 8, at the Butler County Extension Office.  The senator talked about Covid-19, the nation’s debt and budget, the withdrawal of troops from Afghanistan, and the environment, among other items. Several community members and elected officials were present to meet the senator.

“While we all sat and watched the disastrous withdrawal of U.S. troops from the Afghan region, a withdrawal that President Biden and his team referred to as an ‘extraordinary success,’ we are now seeing the full extent of the incompetence of this administration.”

“What's probably the most disturbing aspect of the withdrawal is the fact that there are thousands of Humvees and dozens if not hundreds of tanks and helicopters being left in the hands of the Taliban. Even at this point, when the withdrawal is a complete disaster, I'd still make sure that the equipment was destroyed so that the resources we left are not used against us or our allies in the future.”

“Make no mistake about it, our presence in Afghanistan was long overstayed and I am pleased to have our troops back home. However, the situation could not have been handled more poorly by this administration.” 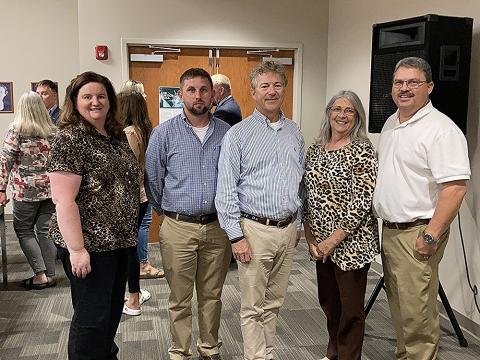 Regarding the environment and agriculture (in reponse to a question):

“While some would have us believe we can only protect the environment by giving the federal government more control over Americans’ lives, my bill shows we can act while still respecting Americans’ private property rights and the Constitution’s limits on federal power.  Kentucky’s farmers and coal industry suffered when the Obama administration implemented its burdensome WOTUS rule. Though the Trump administration replaced that rule, we know the new Biden administration will certainly try to return us to an unworkable scenario again. That’s why it’s now more important than ever to make an actual change to the law to fix the problem, and protect our land and invaluable industries.”

“Today, our country is $28 trillion in debt, $3.1 trillion of that was just from this past year, and some want to add another $5 trillion this year. It will only continue to grow if President Biden and the far left continue to give free handouts and push massive spending bills.”

“ Reckless levels of spending in Washington have been occurring for far too long. According to the Congressional Budget Office (CBO), the size of government has grown by more than 49 percent in the last decade. To put this in perspective, the federal government spends more than $11,530 per person, over $3,700 more per individual than what we were spending in 2005.”

“Four years ago, we could balance our budget with a freeze in spending. Not cut anything. Since then, our debt has skyrocketed to $28 trillion with $3 trillion just from this past year.   “We are now in a situation that a simple penny, two, or even three is insufficient to balance our budget. It requires five. We cannot keep ignoring this problem, this budget sets a goal for balance and provides Congress with necessary tools to achieve that objective.” 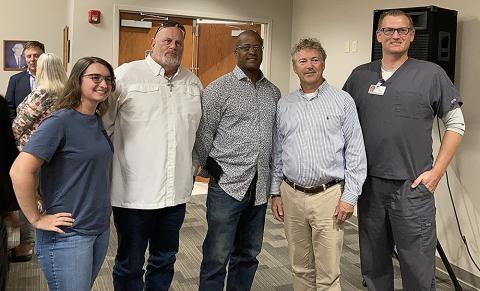 “I believe that defending this country is the primary and most important constitutional function of our federal government. Our nation is at its strongest when we establish clear priorities. For example, the irresponsible spending polices of the past decade have grown the national debt and weakened our defense capabilities.”

“While Governor Beshear refuses to release Kentuckians from the grip of his oppressive mandates, the Kentucky Supreme Court recently ruled that the state legislature can implement new laws this year to limit his unilateral powers to deal with state emergencies.  Following the verdict, Governor Beshear canceled his August 10 executive order imposing an indoor mask mandate in private and religious schools, child care and pre-kindergarten programs across Kentucky.  While this is a small victory in our efforts to rein in our out-of-control governor, we must remember that there is still a long way to go in the fight to reclaim our freedoms.  In a free country, people will evaluate their personal risk factors and are smart enough to ultimately make medical decisions themselves.”

“As a physician, I think it’s incredibly important for patients to have access to as much life-saving information as possible, especially as we still continue to see COVID-19 cases across the country.  For months I have publicly highlighted the benefits provided by monoclonal antibodies treatments and urged Kentuckians and Americans to be aware of this remarkable and effective treatment.  Vaccines and natural immunity are, in my opinion, the primary reason why hospitalizations and death rates have plummeted, but to be clear, my opinion on vaccines have not changed. I’m still pro-vaccine, as I’ve always been, especially for those with high risk factors like older age and increased weight.  Monoclonal antibodies are an effective treatment for this virus that little attention has been paid to. This has to change. It is another effective tool in the fight against COVID and could help save countless lives.”