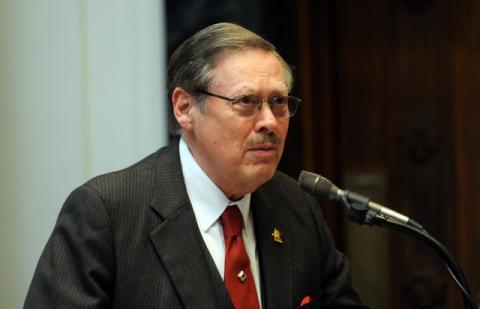 The General Assembly hit the ground running this week as it began the continuation of the 2019 Regular Session. The Senate Majority is excited to move forward with its legislative priorities and pass laws that benefit the Commonwealth.

Through ice and snow, to unseasonably warm weather, the General Assembly continued to discuss legislative priorities throughout the 3-week interim in committee meetings. The newly formed Public Pensions Working Group, co-chaired by Senator Wil Schroder, met twice each week. Throughout these meetings, this bipartisan group from both chambers heard extensive and detailed testimony on the condition of our public pension systems. While there is still much to be done, they are going to keep working toward developing a viable solution to this persistent dilemma facing our state.

Committee meetings were in full swing this week we discussed and passed bills to the senate floor for final votes. On Thursday, the senate passed three pieces of legislation.

Senate Bill 32, sponsored by Senator Stan Humphries, improves the current water well drilling system by allowing water well driller assistants to be certified by the Kentucky Energy and Environment Cabinet. Senate Bill 31, sponsored by Senator Ralph Alvarado, requires the Cabinet of Health and Family Services to provide frequent visitation for siblings who are in out-of-home care and not jointly placed. Senate Bill 77, sponsored by Senator Julie Raque Adams, proposes an expansion of Kentucky’s current organ donor registration list through an easily accessible sign-on system to designate consent. I am a co-sponsor to SB 77 and am excited to see its passage on the floor this week.

Also on Thursday, the Senate Education Committee was honored to welcome families the victims of the Marshall County High School shooting as they testified on behalf of Senate Bill 1. The testimony from the Holt and Cope families was powerful and moving.  At the conclusion of the meeting, SB 1 was unanimously voted out of committee.

I was also a proud co-sponsor of Senate Bill 1. SB 1, the School Safety and Resiliency Act, passed on Friday with an overwhelming majority. Sponsored by Senator Max Wise, SB 1 is a bipartisan piece of legislation that focuses on developing standardized conditions and training that will better secure safety in our schools through personnel, structures/protocols, and a culture of connection with students that concentrates on their overall well-being. Accountability for school safety compliance will also be emphasized. The safety and security of the children of Kentucky is paramount.  As the bill moves to the House, the Senate Education Committee will continue to provide input so that the bill that eventually arrives on the Governor’s desk is in its best possible form.

The Senate will for another productive legislative week in a few short days. In the meantime, I would like to announce an exciting project coming to our district. The Kentucky Transportation Cabinet (KYTC) has announced funding approval for repairs to the New Salem Circle Bridge in Nortonville. The much-needed renewal of this bridge is estimated to take about 3 months and will include additional paving and renovations to the surround roadways.  This structure serves as a vital link to this rural community and I thank the KYTC for valuing safety and quality for Nortonville commuters.

If you have any questions or comments about these issues or any other public policy issue, please call me toll-free at 1-800-372-7181 or email me at[email protected].  You can also review the Legislature’s work online at www.legislature.ky.gov

Note:  Senator C.B. Embry, JR (R-Morgantown) represents the 6th District including Butler, Hopkins, Muhlenberg, and Ohio Counties.He is vice chairman of Veterans, Military Affairs, & Public Protection Committee and co-chairman of the Tobacco Settlement Agreement Fund Oversight Committee. He also serves as a member of the Natural Resources and Energy Committee; the Transportation Committee, and the Budget Review Subcommittee on Education.