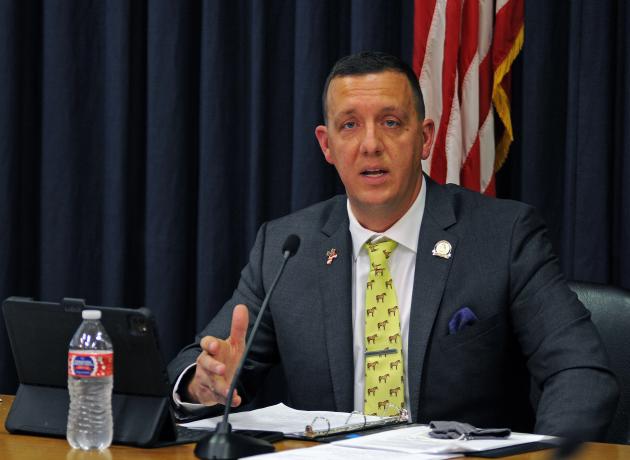 FRANKFORT – Legislation curtailing the governor’s powers to issue executive orders is headed to the full Senate for consideration.

The measure, known as Senate Bill 1, would dictate that executive orders that place restrictions on the function of schools, businesses or nonprofits expire after 30 days – unless extended by the General Assembly. The same would go for executive orders that regulate political, religious and social gatherings or impose mandatory quarantines or isolation requirements.

Sen. Matt Castlen, R-Owensboro, said he introduced SB 1 because the current worldwide pandemic brought to light “fractures” in the current laws concerning executive orders. He made the remarks while testifying before yesterday’s meeting of the Senate State & Local Government Committee. The fact the bill was given the designation of SB 1 reflects that it is a priority of the chamber’s majority caucus leadership.

“We are not hindering the governor to be able to do his job,” Castlen said before an amended version of SB 1 was voted out of the committee. “We all realize the importance of the executive branch to be able to act during a state of an emergency because when an emergency happens, they come fast. That is why they are an emergency.

“We give the governor the ability to do his job – and do it well in 30 days. At that point, if it isn’t an isolated event that local governments can step in to manage, the General Assembly should have some say.”

Another provision of SB 1 would allow the General Assembly to terminate a declaration of emergency at any time by a joint resolution, Castlen said. A second would remove the authority of the governor along with the secretary of state to change the manner of an election during an emergency by requiring the approval of the legislature.

Committee Chair Sen. Michael J. Nemes, R-Shepherdsville, disagreed with that assessments He said SB 1 wasn’t a critique of the current governor. Nemes said that the bill would not take away any power of the governor that wasn’t given to the executive branch by legislation in the ‘90s.

“It is our obligation to adjust some of our actions,” Nemes said in explaining his support of SB 1. “This is what we are doing here."

That bill’s sponsor, Sen. Stephen West, R-Paris, said the goal of SB 2 was to provide a more logical administrative process, transparency and legislative oversight to hamper the ability of executive agencies to legislate through regulation.

“We were not prepared to address the worldwide pandemic with the current regulatory process, so there were some gaps,” West said. “Those became readily apparent in the interim session.”

SB 2 would require some administrative regulations to be in effect no longer than 30 days if they imposed restrictions on gatherings or imposed mandatory quarantine or isolation requirements, West said. The bill would also require the Cabinet for Health and Family Services to promulgate administrative regulations to prevent the spread of infectious diseases, but those regulations would also be limited to 30 days if they impacted educational institutions, businesses or nonprofits.

SB 1 and SB 2 contain emergency clauses, meaning the measures would become effective immediately if is passed into law rather than 90 days after adjournment of the legislature

The Kentucky General Assembly is adjusting its calendar to continue work on pending issues before beginning a January recess several days later than originally planned.

Under the revised schedule, lawmakers have added January 9, 11, 12, and 13 to the days on which the Senate and House will convene. After that, lawmakers will be in recess until the second part of the 2021 legislative session begins on Feb. 2.

Any further adjustments to the 2021 Regular Session Calendar will be agreed upon and announced when the General Assembly reconvenes on February 2.