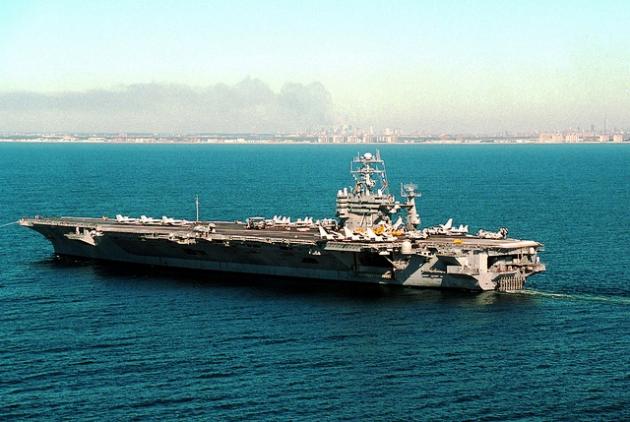 As I write this, September 11th, 2011 has drawn to a relatively uneventful close.  Uneventful, that is, outside of the pair of flights that were escorted into their terminals as a precautionary measure.  I am sure I’m not the only one who almost expected something of terroristic significance to occur today on the tenth anniversary of what will continue to be known for decades as simply, September 11th.

I think back to that morning and find it still amazing how quickly things can change in such a drastic way without warning.  I had just an hour earlier completed a long night shift as supervisor in the electronic data processing center onboard USS George Washington, an aircraft carrier which was based out of Norfolk, Virginia at that time.  I stuck around for a bit, swapping stories and laughs with the day shift folks, caught a shower and went to bed.  Shortly after I fell asleep, I vaguely heard the curtains slide open on my bunk and the lights came on, followed by what I later would recognize to be a mixture of both panic and chaos.  I finally registered what was being told to me, that there had been a terrorist attack in New York and that I needed to get myself back upstairs, and in a hurry.  The general quarters alarm sounded as I was getting dressed, and everyone scrambled to get their gas masks and gear together as they reported to their station of responsibility during a combat situation.  At the moment, we didn’t realize how realistic that scenario was.  We prepared for this repeatedly, over and over, and in the back of everyone’s mind it was all for nothing, as we just knew that the days of war were over for a very, very long time.  As I mentioned earlier, in the blink of an eye, the whole world turned upside down.

Not long after the alarm sounded, we were briefed on the situation.  CNN was piped to every available television on the ship.  Not five minutes after we received word that we were to proceed to New York Harbor, the news broke on CNN.  It’s a very surreal feeling when you’re informed that the President has directed your specific group of people to move to defend the Country in a real-time maneuver, and then to hear it come across the media nearly immediately after.

I’m not sure exactly when we arrived in the waters of New York Harbor, it was in the early morning hours of September 12th, but I will never forget the sunrise that morning, it was as clear a morning as I can ever remember seeing until I saw the unforgettable just to my left.  As I shifted my line of sight, I saw two distinct plumes of smoke trailing into one, and I saw two of our F/A-18 aircraft circling the sky, under orders to remove anything from the sky that defied the nationwide air traffic ban.  75% of us on that ship had been deployed to the Persian Gulf already, and knew what was at stake while deployed, but never before had I felt the range of emotions that I went through that next morning.  Perhaps it was the shock factor the day before, or maybe the two days with no sleep, but it finally set in.  We were at war, we just didn’t know exactly with whom or where it would be conducted.  On October 7th, the world saw the most powerful force on Earth unleashed during “Shock and Awe”, in a mid-night attack on Kandahar.  Eight months later, it would be our turn to do another tour in the Gulf, with over 1,000 missions during our deployment dedicated to the Taliban and insurgent forces in and around Afghanistan.  While war is not a pretty picture to paint, it seemed our crew was proud to have our chance to carry our great Country’s message to the people who thought they could bring us to our knees.  There were some sleepless times during that nearly seven months, as the radars were nearly continually picking up enemy aircraft, which was much different than anything we had experienced in our previous deployment.  Tensions and stress levels ran high much of the time, and despite all the resources dedicated to keeping us out of fire, we still often felt like sitting ducks.  In the end, all but one returned home, and we felt like we had a major part in sending a message to the Taliban and other terrorist groups across the world.  Ten years later, it’s not over, but progress has been made, thanks to the sacrifices of thousands more Soldiers, Sailors, Airmen, Marines and their families.  I learned some important life lessons during my eight years in the Navy.  Most importantly, I learned it’s okay for a grown man to cry, and if you look you’ll see a tear on the cheek of this grown man nearly every time I hear our National Anthem. You’ll likely see tears of anger and disgust when the man with his hat on is laughing with his buddy during the honoring of our flag, and you’ll likely see me claim a new hat if I’m within reach of that individual.  That’s okay pal, two-million, five-hundred thousand men and women have been wounded or killed since 1775 so that you have the right to run your mouth and dishonor the very freedom you take for granted.  That’s approximately thirty people PER DAY for the last 236 years. Keep that in the forefront of your mind the next time you see that beautiful flag flying against a blue sky or hear that Anthem… visualize the scene as you hear the words and you’ll see there’s much more to it than a piece of cloth and some embroidered stars.