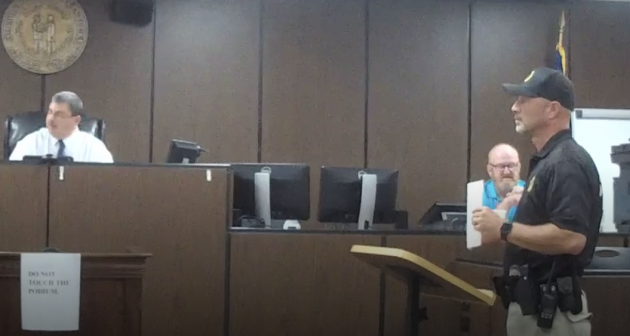 Kevin Blaine with Assured Partners made a presentation concerning his Consulting and Brokerage Firm and the Fiscal Court.

"Your employees are your greatest asset," said Blaine.

According to Blaine, his firm could evaluate the county's benefits package and possibly design a better and more cost-efficiency plan. The court took no action.

Butler County Sheriff Scottie Ward presented his tax settlement to the court, including mineral, property, and franchise tax. Sheriff Ward also addressed a revenue shortfall in his office. According to Ward, tax collection has been slow and the inability to transport prisoners because of COVID-19 has caused the deficit.

"I had to take $8 out my pocket to make payroll last week," said Ward.

Ward asks the court for a three-day advancement on his August allotment to make current payroll. The court approved the request.

Judge-Executive Tim Flener announced an E-911 grant for $91,344.80 for radios. The current radio system was installed in 1978 and will no longer be repairable after February 2021. The Homeland Grant is a 90-10 grant, with the county contributing $9,134.48. Judge Flener thanked everyone involved for all their hard work on the grant paperwork.

Fourth District Magistrate David Whittinghill made a motion to name the Rochester Paddlewheel, Miss Susan, in honor of Susan Johnson, a Rochester resident, and former Butler County Treasurer. Third District Magistrate stated that he thought Rochester's people should name the paddlewheel and mention Wilma Givens as a name because he ran the ferry for several years. The court approved the motion by a 3-1 vote with Timmy Givens voting nay.

Judge Flener stated that chipping and sealing should start by August 1.

The court approved the following by a 4-0 vote:

-Accepting bids for painting and or replacing the roof at the First District Fire Department.

-Up to $500 to repair the overhead door at the First District Fire Department.