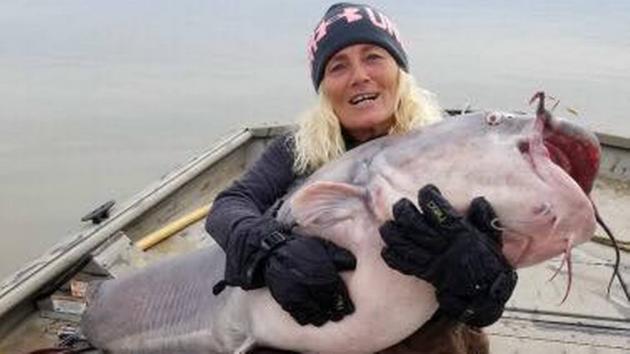 A Tennessee woman had the catch of a lifetime last weekend when she hauled in an 88-pound catfish on the Tennessee side of Kentucky Lake.

Dubbed a “river monster” by the Tennessee Wildlife Resources Agency, the massive catfish was caught Sunday by Paula Cathey Smith near her hometown in Waverly, she told The Tennessean.

In an interview with News Channel 5, Smith said she has been fishing since she was a little girl but her haul on Sunday was unlike any of her others.

The fish was released safely back into Kentucky Lake, according to the Tennessee Wildlife Resources Agency.

An 88-pound fish is roughly equivalent to an average 12-year-old human, according to a Cincinnati Children’s Hospital growth chart.

Prior to her impressive hook Sunday, she said had been in a slump and had not caught any big fish recently.

“Everything’s been messed up for about a month now; I’ve been managing to catch fish, I’m just not catching my big guys,” she told The Tennessean. “We had been out about 30 minutes Sunday and I threw out fresh gizzard shad and bam! He hit it right off the bat.”

The record for the heaviest catfish caught in Tennessee was in 1998, when Robert E. Lewis hauled in a 112-pound catfish on the Cumberland River, according to Tennessee fishing records.

Smith said her previous best was an 82-pound catfish, according to The Tennessean.