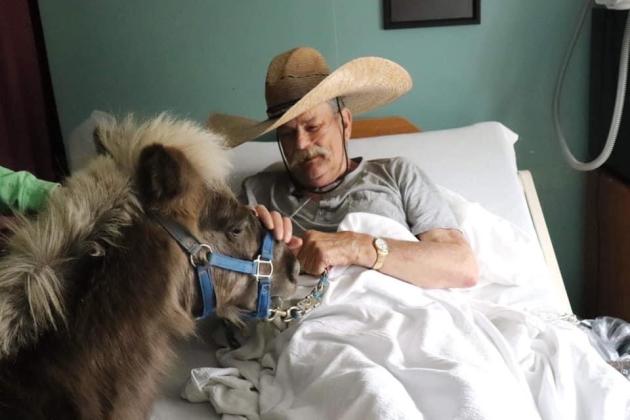 “God knew what he was doing when he made animals,” Kim Arnold could be heard telling one of the residents at Morgantown Care and Rehabilitation on Saturday.  At the time, the wheelchair-bound resident she was assisting was nuzzling the mane of a small pony, which was part of a therapeutic interaction with horses that took place at the center on Saturday, October 29th. 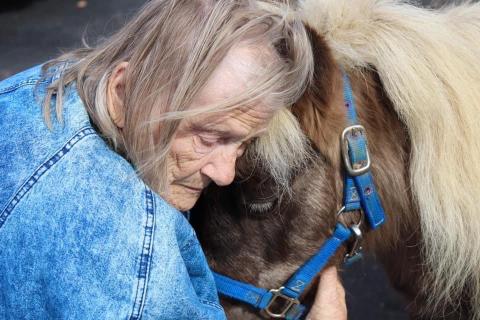 Mindy Dockery is the founder of Riding on Faith, and on this particular day, she saw the long-held dream to bring others the therapeutic power she has always received from her own horses come to fruition.  Besides her assistant, Kim Arnold, Mindy brought a whole entourage of friends and family to help with the day.

The activities began in the parking lot of the center with two Quarter horses—Raven and Dodger, two ponies—Dixie and Amish, and two dogs—Nana and Dixie.  Residents who were mobile enough to make it outside to interact with their equine visitors, fed them carrots, apples, bread and treats. Activities Director of Morgantown Care and Rehab, Makenzie Murrell, in addition to other hospitality aids of the facility were on hand to assist as well. 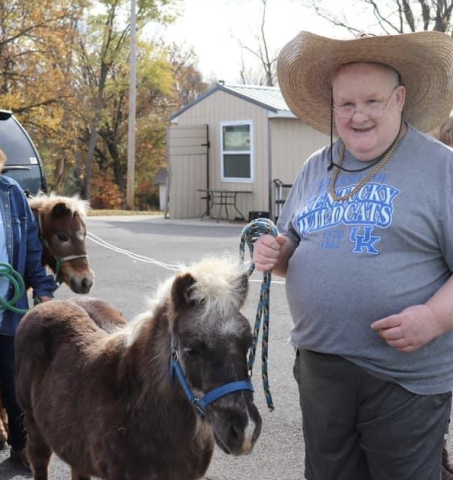 There is a saying about our state, “If you live in Kentucky, you either have a horse or know someone who does.”  The truth in this adage was apparent on Saturday as the talk of horses who had been part of the residents’ younger lives could be heard.

“I had an Appaloosa,” one resident said.

“The best times of my life were spent on the back of a horse,” another resident remembered.

“Hold your hand out flat when you feed it that apple, and it won’t bite you,” one resident instructed another.

The horses and ponies, as well as the dogs, patiently allowed lots of hugs and pats and even a few kisses from delighted participants.  Afterwards, the ponies and dogs were escorted indoors at the center, where they were led from room to room to visit residents who weren’t able to be part of the outdoor experience.  The transformation on their faces was immediate, from smiles and laughter to a few tears, as the animals made their way to outstretched arms. 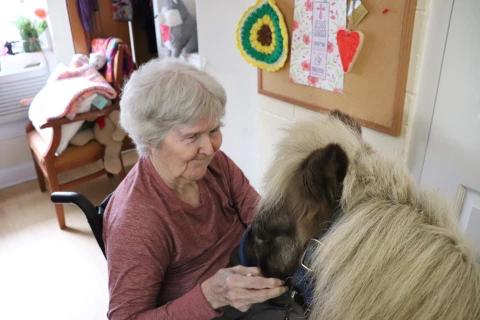 Mindy’s mom, Penny Rouse, who assisted her daughter on Saturday, knows first-hand the healing power of a horse.  When Penny was a child, her father was involved in an accident at work.  He was paralyzed from the waist down.  Doctors at a Louisville hospital wanted to operate, but her dad had other ideas.  Once home, he asked his wife to bring him his horse.  He dragged himself out onto the porch, where he told his horse, Little Boy, “You’re going to have to help me.”  The horse understood and kneeled low enough for Penny’s dad to grab the saddle horn and pull himself up and into the saddle.  He rode Little Boy every day for a little over three weeks, at which time he walked back into the same hospital, without assistance, to show the doctor his miracle. 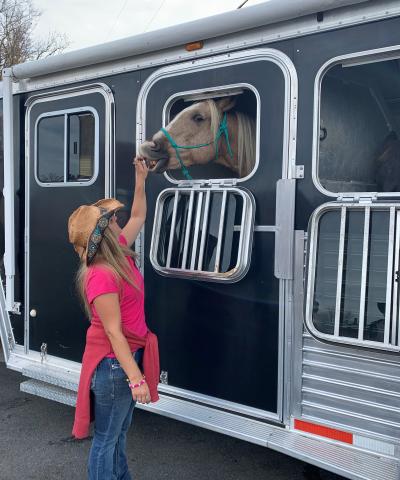 Saturday’s event ended in the parking lot where it had begun.  The animals were fed and watered then loaded up for the trip home.  It had been a successful day.  It usually is when a horse is involved.

For more information on RIDING ON FAITH EQUESTRIAN THERAPY or private riding lessons,