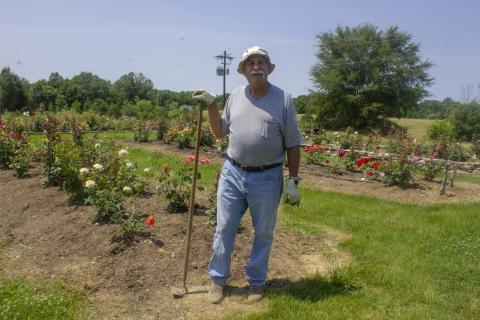 If you have driven past his house you would probably know it. It would be hard to miss the colorful array of roses displayed in his front yard. Ricky Lockhart of Morgantown, Kentucky started out growing roses as a way to pass the time during his retirement, however it has now become a big part of his life. Ricky first began growing roses about 20 years ago and started out with around 15 rose bushes. His collection of roses has now grown to 150 roses housed in four beds at the front of his yard.

His success with roses grew even bigger shortly after joining the Bowling Green Rose Society. Lockhart said a friend of his encouraged him to join and even bought him a membership. As he started attending monthly meetings, he learned more and more about the art of roses and the process behind it. After many years as a member and many attempts by his friends, Lockhart has recently become the president of the Bowling Green Rose Society and will hold one more year in his position.

Lockhart discussed his win and the rather comical explanation behind the loss of one rose which caused him a disqualification due to a misnaming of the rose. An exhibition rose with the name “Mr. Lincoln”, named after the 16th U.S. President, was up for judging before it was realized that he had misnamed it “Abraham Lincoln” instead. Lockhart said it is a mistake he won’t make again.

Lockhart said he mainly competes in the large roses section of the competitions and while he grows multiple different types, he mainly focuses on exhibition-style roses including Hybrid Tea and Grandiflora Roses, as well as many Floribundas. He discussed the complexity and variety of roses and the unique names given to many of them. Some names for example, include Moonstone, Girls Night Out, Life of the Party and even roses named after famous icons such as Dolly Parton and Rosie the Riveter. With over 5,000 different rose types, it can be hard to figure out their given names if it is not already known, Lockhart said.

To ensure that his roses are properly grown and cared for, Lockhart has developed a specific watering and fertilizing system for his rose beds. He says many people expect to be able to grow roses in grass or poor areas that many times don’t have good results.

“It is some work…you have to take care of them,” he said.

With 98 acres of land and many cattle and crops to tend to, Lockhart spends much of his time outside tending to his flowers and other duties. He says it makes a great hobby for retired folks and is an excellent way to pass the time. He discussed how he often hears of many people, who after a few months of retirement, say they become bored.

“If they had a rose garden they wouldn’t be bored,” he said.

For those not retired, Lockhart says it is still possible to maintain a rose garden. He said he hears so many people talking about how they don’t have the time. Lockhart says it takes time and it’s a process but it's not hard.

“If you get up from the T.V. an hour or two every day or so and come out and work, it’s not much,” he said.

Lockhart says he wishes more people would get interested in roses and consider joining the Rose Society.

“I would love to see a bunch of people get started growing them,” he said.

He encourages those of all ages and experience levels interested to join the Rose Club which meets on the second Sunday of every month at 2 p.m. at the U.K. Extension Office. He said membership fees are cheap at just $15 a year and each meeting consists of a program or guest speaker. Classes are offered on everything from how to grow roses to winterizing, fertilizing and even how to trim roots and prevent black spots.

He says lately they have been getting a lot of people and new members coming in who didn’t know how to grow roses and ended up surprising themselves and even winning awards.

“We're getting some of them excited about doing it now and we’ve got several new members and hopefully in the next two or three years we get a bunch more to come in,” he said.

Lockhart plans to continue his rose gardening work with hopes to start a new rose bed soon and reach 250 or more roses within the next few years. He also plans on attending more rose shows such as those taking place in Nashville and Louisville. He even discussed the possibility of taking place in or hosting a Garden Tour with his fellow gardening friends or with those of the community.