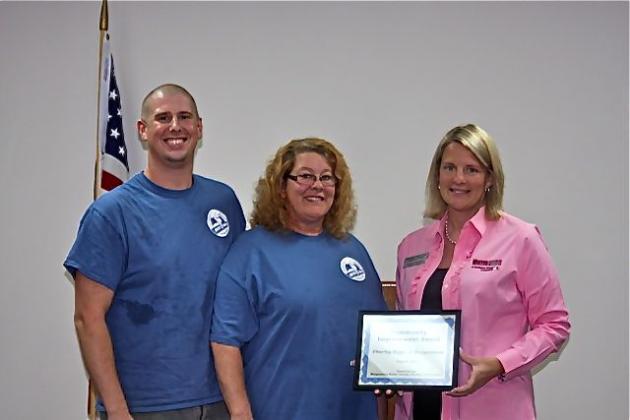 Ron Bunch, president and CEO, of the Bowling Green Area Chamber of Commerce brought a message to Morgantown on Thursday advocating a regional approach to economic development - a strategy that he says has brought over 500 jobs to Butler County over the last 2-3 years.  Bunch was in town as the featured speaker at the Morgantown-Butler County Chamber of Commerce's July luncheon.  As the BG Chamber's top executive, Bunch said the regional approach is market driven as counties are not competing against other counties when it comes to economic development but rather are competing against other states and countries, making collaboration important.  Working in a 10-county region, Bunch is able to leverage the resources of multiple counties - including the presence of Western Kentucky University -  in a effort to recruit companies and industrials prospects to south-central Kentucky.  He cited statistics indicating that industrial site selectors have given the Bowling Green Area Chamber high marks in marketing this area to prospective companies.

Although a strong believer in regional economic development, Bunch said each county plays a key role in that process and he praised local leaders - city, county, and chamber - for their efforts.

"Economic development happens at the local level.  The state sets the environment but it takes local judge-executives and mayors to make things happen," said Bunch.

Jobs created over the past few years reflect the success of regional economic development.  In Morgantown and Butler County, several companies have added jobs to the local economy:  Blackhawk Composites (30), Casco (65), Certified Flux (12), Corvac (35), Kentucky Copper (120), and Sequa (280).  Across the 10-county region, Bunch indicated that companies in the BG Area Chamber region has added nearly 3,500 jobs since 2009.

In other Chamber business, James and Jean Beattie were recognized with a Community Improvement award for their new business in Morgantown - Charley Biggs' Chicken.  "I want to thank the community for coming out and supporting us," said James.

Interim Morgantown Police Chief J.R. Wilkins was attended his first Chamber luncheon since being hired to lead the department earlier this month.

Roger Givens announced that he had a new book coming out August 27 - Images of America: Butler County, Kentucky.  According to Givens, a noted photographer, the book is a pictorial history of Butler County.

Chamber President Jamie Chaney announced that nominations to serve on the Chamber's Board of Directors are due August 1; Harvest on the Square is set for October 13 from 10 a.m. to 4 p.m.; the date for the Chamber's Annual meeting hasn't been set yet; Green River Catfish Festival Cook Books are for sale; and that September 27 is the last luncheon of the the year.