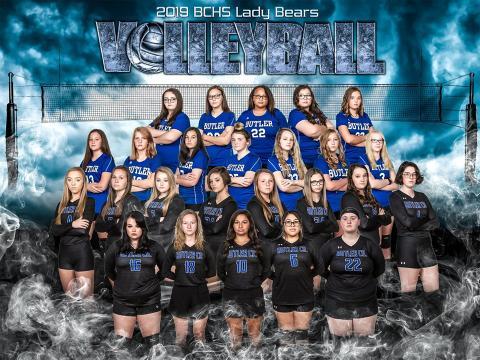 On Monday night the BCHS Lady Bears volleyball season came to an end, dropping their match vs Whitesville Trinity 1 set to 3.  The Lady Bears got off to a good start winning the first set with a score of 26-24.  The teams played close throughout that set with Butler edging out at the end. The second set was much the same with Trinity pulling away to a 25-20 victory.  In the third set the Lady Bears were extremely flat and lost 13-25.  It looked as though the girls had lost all their energy, but that was not the case as they jumped out to a 16-5 lead in the fourth set.  However, Trinity called a time out and then began to ease back into the match cutting the lead to 16-10.  After trading points Trinity once again put together a run to take the lead 20-19.  The Lady Bears never stopped fighting, but Trinity put together some good plays to win the set and match 25-23.

The loss was disappointing, but the season was a success as the girls ended with a 15-9 record, which is a school record.  Listed below are other records that were broken this season.

London Howard was selected to the All-Academic team

Delaina Flener and Lillian Gidcumb were named to the All-Season team.

Autumn Gidcumb was All- Season and also honored as an All-Tournament team member.