The real road to Love runs through the heart of Kentucky. How our columnist found it 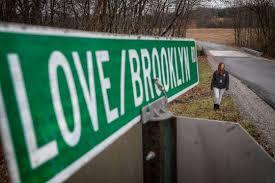 I tried finding Love in Kentucky. It was much harder than I thought.

Faced with a gravel road, barren trees and a perfect blue sky, I'd already gone a good mile past where Google had told me Love was supposed to be — only to find more gravel and more trees.

I knew love could be rough, but as my car rumbled over those rocks, I thought this must be overkill.

On a whim, I'd driven 100 or so miles from Louisville to Butler County in search of an unincorporated community called "Love." Instead, my GPS led me to the seemingly uninhabited woods along rural Boss Hog Road.

I figured "Love, Kentucky" might be fertile ground for a Valentine's Day column. Someone must have fallen in love in Love at some point. If I couldn't find that, at the very least, I could talk about the heartbeat of the community.

But as I made a U-turn and headed back toward the nearest town, I was falling into an entirely different kind of love.

Lost Love, to be exact.

The Butler County community is so small Wikipedia doesn't even list the population let alone a former resident or a fragment of history. When you Google "Love, KY" the search engine doesn't give you a list of attractions but rather links to websites for Love KY adult products and locations for the Love's Truck Stops in Kentucky.

I hadn't banked on a heart-shaped monument or even "I Love, Kentucky" T-shirts, but honestly, one of those small green markers with white lettering reading "Love" would have been nice.

But I wasn't giving up on Love just yet.

There's a post office in nearby Jetson with a single parking spot a little more than two miles south from where my search for Love hit a halt. It's the sort of place that rents fewer than a dozen mailboxes and only operates from 11 a.m. to 1 p.m. daily. The clerk stationed behind the counter seemingly knew everyone in town.

"Can you help me find Love," I asked her.

She looked as puzzled as I felt. She'd never heard of the place. Letters addressed to Love didn't come through the post office, and she couldn't think of anyone who might live there.

So she led me back outside to that one-spot parking lot, and she pointed down the road to a white house with black shutters. I could just barely see it peeking out behind a large tree.

That was where Mr. Hendricks lived, she told me.

He's a retired pastor, and years ago he owned a grocery store in town. If anyone knew how to find Love, Richard Hendricks would.

So I wandered up to his driveway and heard a rapping noise directing me to the back shed, which he'd turned into an office. Inside, the kind man humored my questions about Love for nearly 45 minutes in between tales of weddings he'd performed and directions he'd given to folks over the years as the community's grocer.

Evidently, I was the first one who'd come through searching for Love.

Typically folks sidetracked here were lost on their way to the Holiday World Theme Park in Santa Claus, Indiana. He explained that Highway 70 in Indiana runs just south of the theme park just like Highway 70 in Kentucky runs not too far from the old closed grocery store just next store.

I grinned. If only this journey to Love ended with the Valentine's Day equivalent of Prancer's Merry-Go-Round. Holiday World doesn't have a cupid-themed ride, so chances are Butler County doesn't either.

The lost art of passing notes: How friends keep memories alive with letters from the '70s

Still, he listed three people he knew from the Love area and rattled off two of their phone numbers by heart. He talked about a man who once delivered mail 15 miles from Caneyville to the Love Post Office by mule. That building had been gone for years, though, and he wasn't quite sure where it had been.

The way he told it, Love was more intimate than I originally imagined. He couldn't say for sure, but he doubted there were more than 20 people who called it home.

He hadn't grown up there, and to really get to the heart of Love, I'd have to ask a native. I thanked Mr. Hendricks and went on my way.

I took a slight detour from his suggestions and drove 12 miles to Butler's county seat, Morgantown. A bustling metropolis compared to the seemingly nonexistent Love, Morgantown boasts about 2,400 people, a quaint downtown and yes, a public library.

Thinking Love was just within reach, I cozied into the genealogy section with copies of "Butler County, Kentucky Histories and Families" from 1987 and "Images of America: Butler County."

My heart sank. I was looking for Love in all the wrong places. There were chapters on the people, businesses and local lore that made up Butler County's other unincorporated communities — Logansport, Quality, Brooklyn, Lee and Reedyville — but what about Love? I couldn't find anything about the community or the post office that Hendricks had mentioned.

And then I caught a glimpse of it.

The town didn't appear on a map, but I spotted it on a registry of Butler County's earliest schools. Three teachers were listed as having a Love address.

But this Love story's ending would have to wait. It was getting late, and I wasn't convinced I was going to find the community before dark.

So the next morning I called one of the numbers Hendricks gave me and arranged to meet with a man who'd grown up in the area and still had a house there.

Daryl Embry, 73, warned me there wasn't much of Love left, but even so, Courier Journal photographer Michael Clevenger and I met him at The Farm Boy Restaurant in Morgantown the following week.

The picturesque small town diner with a menu that can get you a solid breakfast for under $5 serves as a meeting ground for Butler County. The waitress recognized us immediately as strangers, which suggests she probably knew most everyone else who wandered through the door. She directed us past what Embry later called the "old liars table," through the collections of Coco-Cola antiques to a back corner where the elderly farmer was waiting for us.

"I'm trying to learn anything I can about Love," I told him.

Turns out, the Love community is a short 0.7-mile stretch along Lumbustown Road, which runs between Love Brooklyn Road and Love Lee Road, not to be confused with "lovely." It's also not very far from that Boss Hog Road and all that gravel where I'd gotten lost the week before.

I didn't miss that town population sign I searched for during my first trip. It doesn't exist.

Usually, Embry doesn't even say he's from Love. His postal address is Morgantown, and half the time people don't even know where Butler's county seat is, so usually he claims Bowling Green as home.

He didn't know how the tiny community got its name, and it's had it so long no one around there thinks calling the place "Love" is odd.

But when he was a small boy, Love did indeed have its own post office, and there was a one-room wooden schoolhouse that he attended from the third to the sixth grade. At one point the community had a small store, but he couldn't remember what it was called or even what it sold. It's been long enough that he doesn't know when those buildings were torn down, but he could still point the spots and the nearby trees where they stood.

Most of Love's residents farmed. His family grew beans and corn, and raised cattle. Many of their neighbors did too.

He started counting through the houses he remembered from the 50s and the 60s, and he didn't get higher than eight. When he was a boy there were plenty of children in the neighborhood, and they played croquet, wrestled and camped out under the stars.

Today he guesses his grandchildren are the only youngsters in the community at all. Most of the families he knew growing up are gone, and much of the land is owned by people from out-of-state.

"Everything that was there when I was going to school there is basically gone, except one house," he told us.

When we followed him out to the community about a half-hour later, Clevenger and I saw he was right.

We'd finally found Love — but at most, it's a well-paved road with a couple houses, a couple trailers and a beautiful, sweeping field tucked behind a barbed-wire fence.

We thanked Embry for his help, and then Clevenger and I took that Love Brooklyn Road out about three miles until we found a street sign, just so we could have some photographic evidence Love existed at all.

Two hours later on the way back to Louisville, I racked my brain trying to figure out how this Love story ends.

After two afternoons and 400 miles on the road, I felt at a loss. I was coming back to the newsroom without that mythical "I Love, Kentucky" t-Shirt or even that love story in Love I'd dreamed about.

Dreaming, perhaps, was the root of my problem.

But Clevenger saw the whole thing differently. We had found Love.

"Love just wasn't what we thought it would be," he told me.