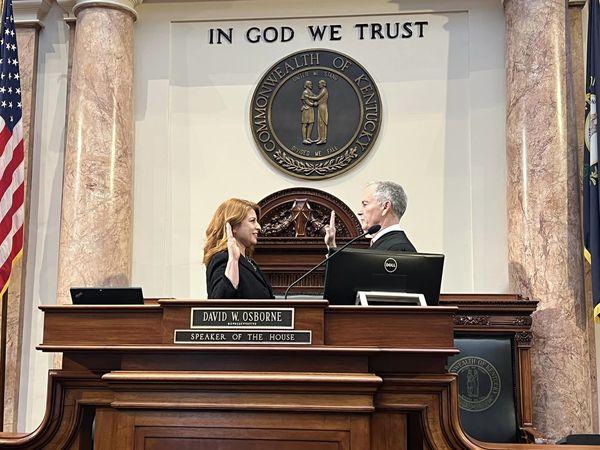 “I was thrilled today (Thursday) to vote to lower Kentuckians’ income tax.  HB 1 is making it possible for Kentuckians to keep more of their hard-earned money in their pocket.”  –State Rep. Rebecca Raymer, R-Morgantown.

As the Kentucky General Assembly gaveled into session this week, a new member from Butler County was sworn into office in the state House.

State Representative Rebecca Raymer, R-Morgantown, took the oath of office on Tuesday, January 4, on the opening day of the Kentucky General Assembly.  She was elected in November to represent the 15th District (Butler & Muhlenberg counties) in the Kentucky House of Representatives.

In a Facebook post after being sworn in earlier in the week, Rep. Raymer expressed her humility and gratitude for the opportunity to serve.

“I’m still so humbled that so many people put their trust in me to be their voice,” said Raymer.  “I promise to remember I am a public servant, and the people I serve are who I answer to.”

In one of her first actions, Rep. Raymer cast a “Yes” vote for House Bill 1, which automatically reduces the state individual income tax rate from 5 to 4.5 percent this year, and down to 4 percent in 2024.

House Bill 1 is follow-up legislation to the 2022 measure, House Bill 8, that legislators passed that set in motion automatic “triggers” to gradually reduce and ultimately eliminate the individual income tax in Kentucky as long as specified budgetary conditions are met.

According to reporting from the Louisville Courier-Journal, those budget conditions include the reserve trust fund for the state to be “at least 10 percent of tax revenue for the previous fiscal year, and those same receipts exceed spending by at least the amount of revenue that would be lost by cutting the tax rate a full percentage point.” 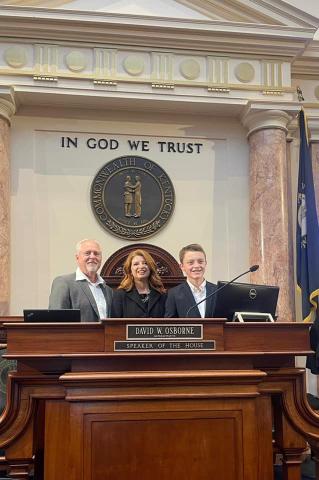 (Raymer was joined by husband Jeff and son Chandler)

“I was thrilled today (Thursday) to vote to lower Kentuckians’ income tax.  HB 1 is making it possible for Kentuckians to keep more of their hard-earned money in their pocket,” said Raymer.  “Moving Kentucky to a more consumption-based tax model is going to make us more competitive with other states and help invigorate our economy.”

Additionally, she is a primary co-sponsor of a bill designed to keep Covid vaccines from being a required vaccine for school attendance.

Raymer said she was excited for the opportunity to serve as a co-primary sponsor on the bill, especially on a subject that she is passionate about.

Rep. Raymer can be reached by constituents by email at Rebecca.Raymer@lrc.gov and by phone in Frankfort at 1-800-372-7181.