Racers make it nine in a row with win over Redhawks 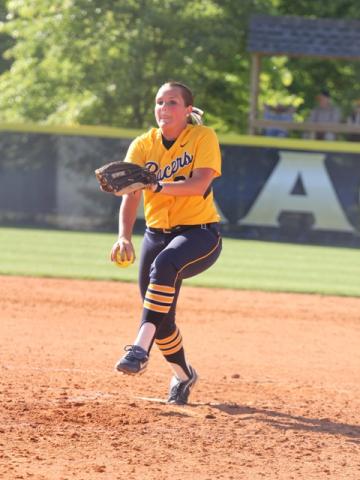 Full Count, bases loaded, two outs, down a run with a senior at the plate on senior day.

It doesn’t get much better than that.

Trailing 7-3 heading into the bottom of the seventh, Mo Ramsey led off the inning with a bunted single to the first baseman. She would score on Alexa Becker’s third triple of the season, a line drive that the diving center fielder would be unable to catch and would roll to the wall.

Becker scored the innings’ second run on a Casey Castile double off of the top of the right field wall, and Castile moved over to third as the relay throw into the infield was bobbled.

A Sarah Anderson single up the middle into center field with one out scored Castile to make it a 7-6 game.

Ellyn Troup was hit on the first pitch of her at bat, and Stephanie Edwards drew a walk against a 3-2 count to load the bases with one out.

Christian Cox flew out to center for the second out of the inning on a ball not deep enough to score on, bringing Glosser to the plate with the game on the line.

The Redhawks (22-29, 13-16 OVC) jumped on Murray State to start the game, scoring three while also leaving three runners stranded on base.

SEMO added two more in the top of the fourth on a Shelby Stein home run to right field to take a 5-0 lead.

The Racers grabbed two runs back in the bottom of the fourth, scoring one as Castile led off the inning with her team-leading ninth home run of the season. Edwards later singled on a deep fly ball off of the left field wall, scoring pinch runner Mallory Richardson.

Anderson cut the Redhawks’ lead to two runs in the bottom of the fifth, singling up the middle of the infield with two outs to score Becker from second.

Southeast Missouri doubled up its lead in the sixth on the team’s second home run of the day, a two-run blast from Kaitlin Wallace to make the score 7-3.

The Racers have now won a program best nine games in a row, including their last five OVC games.

CheyAnne Gaskey improved to 8-2 on the season, entering in relief in the top of the first and throwing 6.1 innings. She gave up four runs on four hits and a pair of walks while striking out two. Gaskey has now won her last six decisions and has earned wins in her last six appearances.

Alora Marble was saddled with her second loss of the weekend, giving up eight runs on 11 hits while issuing five walks and striking out a pair.

Xia Wilson was the lone Redhawk with two hits, and Shelby Stein drove in a game-high three runs.

The Racers return to non-conference action this week, traveling to Carbondale, Ill., for a single game against Southern Illinois at 4 p.m. Tuesday, May 1, before a doubleheader the next day at Missouri at 3 p.m. Wednesday, May 2.